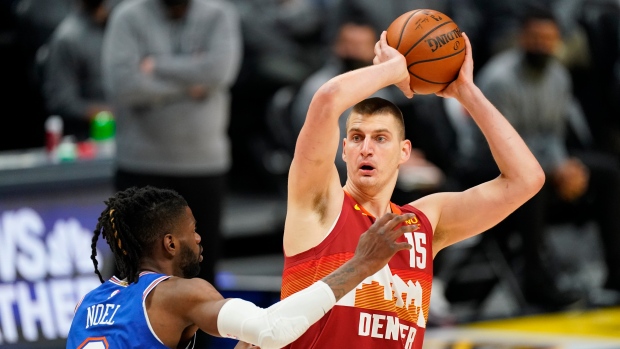 DENVER — Nikola Jokic scored 24 of his 32 points in a dominant first quarter in the Denver Nuggets’ 113-97 victory over the New York Knicks on Wednesday night.

Jokic hit 8 of 9 shots in the first quarter and finished with 12 rebounds to help lead the Nuggets to their 10 victory in 12 games. Denver, which led by as much as 31, moved back into a tie with the Los Angeles Clippers for third place in the Western Conference.

“Some games I don’t score in the first half and then I score a lot in the second half,” Jokic said. “The team was finding me, I was making shots. It just happened like that.”

Austin Rivers scored 11 of his 25 points in the fourth quarter against his former team, Michael Porter Jr. had 17 points, and Facu Campazzo 16 points and nine rebounds.

This one got away from New York early. The Knicks committed three fouls in the game’s first 22 seconds and coach Tom Thibodeau was hit with a technical 28 seconds in. Things got worse from there.

RJ Barrett picked up his third foul with 5:32 left in the first period, the Knicks shot 4 of 24 from the field and went 5:46 between made shots.

“When he’s going like that we get to just chill,” Porter said. “We just throw to him and we just chill. If he finds us on the weakside we’re ready to shoot. No big man in the NBA can guard him one-on-one so we let him to go to work.”

Randle had 14 points and eight rebounds and Derrick Rose, Reggie Bullock and Barrett also each scored 14 points. The Knicks had won 12 of 13 before Wednesday night.

Rivers got extended playing time with Denver’s backcourt decimated by injury. P.J. Dozier suffered an adductor strain in Monday’s loss at the Los Angeles Lakers, the fourth guard to go down in the last month.

“This is one of our most impressive wins of the year considering who we have available and the quality of opponent,” Nuggets coach Michael Malone said.

The Knicks got to 78-62 with a trio of 3-pointers from Barrett and had a couple of chances to get within 13 but couldn’t get any closer. Porter hit a 3-pointer and Rivers two free throws to make it 108-77 with 5:48 left.

“We either win or we learn, and I think we learned a lot,” Thibodeau said. “It was a physical game, it was tough and it went against us.”

Thibodeau doesn’t put too much importance into the awards.

“We don’t get wrapped up in any of that stuff; I’m happy for Scott, thrilled for Julius,” he said. “Obviously, that’s the most important thing, our players being recognized for winning and that’s how I feel about it.”

Knicks: At Phoenix on Friday night.

Nuggets: At Utah on Friday night.