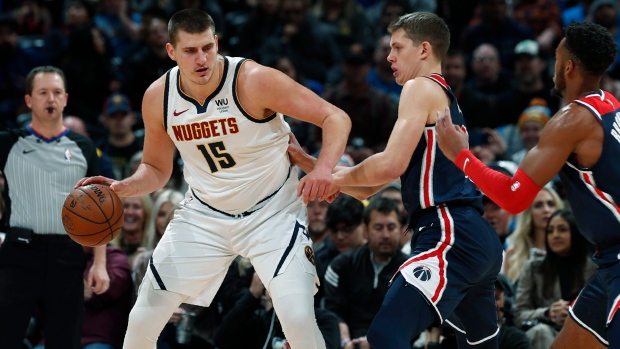 DENVER — Gary Harris isn't putting up big scoring numbers. It’s the guard's defence that has spearheaded the Denver Nuggets' rise to the top of the Western Conference.

After another shutdown night, Harris’ teammates are campaigning for him to be on the NBA's all-defensive team.

"We're not joking around with first team," Jamal Murray said. "He's been showing it. Not just one game, not just two games, but all season long."

Harris held Washington guard Bradley Beal to a season-low 14 points, Nikola Jokic had a season-high 20 rebounds and Jerami Grant added a season-best 20 points to lead the Nuggets to a 117-104 win over the Wizards on Tuesday night.

Will Barton had 17 points, eight rebounds and eight assists, Murray added 16 points and Mason Plumlee scored 15 for the Nuggets, who are 10-1 in November and ended a three-game home losing streak against Washington.

Beal, the Wizards’ leading scorer averaging 29.6 points, failed to score 20 points for the first time this season and was held to 6-for-15 shooting. He was 2 of 10 from behind the 3-point line.

"Anytime you can manage the best player on the other team, you start with that," Plumlee said. "Brad Beal's a heck of a player and he didn't get 20, 30 points."

It is a familiar theme when the Nuggets face an elite guard. Houston's James Harden scored just 27 points, 10 below his season average, and Devin Booker had just 12 when Phoenix was in Denver on Sunday night.

"That's all Gary," Grant said. "He's locking everybody up this year. He's shutting everyone down."

Denver held one of the NBA's prolific offences to its second-fewest point total of the season. Washington entered the game averaging 119.1 points and had failed to score at least 100 points just once in 15 games. It needed 35 in the fourth to reach 100 this time.

Jordan McRae had 21 points and Moritz Wagner and Davis Bertans each finished with 14.

The Nuggets grabbed control in the second quarter, opening a 17-point lead after Washington led 27-26 early in the period. Grant had 15 points in the second and 16 in the half as Denver took a 64-47 lead into the break.

"They did a good job all night just trying to get downhill," McRae said. "I think we have to do a better job of helping each other going up in the paint, just knowing everybody has everybody's back."

The Nuggets pushed the lead to 20 points in the third quarter and after Washington closed within 14 midway through the fourth quarter, Barton converted a rare 4-point play to make it 107-89.

Those were the only four points of the fourth for Barton, who was the only Denver starter to play in the quarter.

"We gave them no resistance. There was no physicality," Wizards coach Scotty Brooks said. "When you don't give any resistance to a great team, they're going to get 70 points in the paint."

Wizards: Guard Isaiah Thomas received warm applause from the crowd when he was announced as a starter. He played 12 games with the Nuggets last season. ... Washington was 1 of 16 from the 3-point line in the first half and finished 10 of 40 from behind the arc.

Nuggets: Their last home win against the Wizards was March 12, 2016. Denver outscored Washington by 24 in the fourth quarter to win by 16. ... The Nuggets weren't called for a foul in the first quarter. They picked up six in the first 2:46 of the second quarter. ... Malik Beasley scored 11 points off the bench on his 23rd birthday.

Wizards: At Phoenix on Wednesday night.

Nuggets: At Sacramento on Saturday.