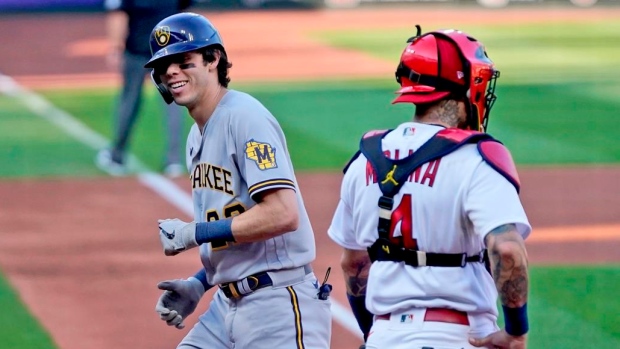 A team-by-team breakdown of what each club needs to clinch:

Cardinals (29-28) — Qualify with a victory over Milwaukee or a loss by the Giants. If St. Louis loses and San Francisco wins, the Cardinals would make up two games against Detroit on Monday that were postponed this season due to St. Louis' coronavirus outbreak.

Brewers (29-30) — Qualify with a victory over St. Louis, or with losses by the Giants and Phillies.

Giants (29-30) — Qualify with a victory over San Diego and a Brewers loss. If the Giants and Brewers win, San Francisco needs St. Louis to lose both games against the Tigers on Monday.

Phillies (28-31) — Qualify with a win over Tampa Bay and losses by the Brewers and Giants.

The Astros, Brewers or Phillies could become the first team in baseball history to qualify for the post-season with a losing record. The 2005 San Diego Padres made the playoffs at 82-80, the lowest winning percentage among post-season participants. Of course, that was before MLB expanded the field to 16 teams as part of this pandemic-altered season.

Houston (29-30) has already punched its fourth straight post-season ticket, and first-year manager Dusty Baker is already assured of a playoff visit with his fifth different franchise in that role. The Astros close their season at Texas.

The NL West champion Dodgers hope Mookie Betts checks out OK after the star outfielder was hit in the left hip by a pitch and exited Saturday night’s game against the Angels.

Betts was plunked by Julio Teheran leading off the first inning. Betts stayed in and scored on a bases-loaded walk, but was limping in the dugout. He was replaced by Kiké Hernández in right field to start the second.

Manager Dave Roberts said Betts was day to day and that no imaging was required.

Betts leads the Dodgers in homers (16), runs (46) and stolen bases (10). Los Angeles has won its eighth straight division title and clinched home-field advantage throughout the post-season.

Yankees infielder DJ LeMahieu is on the verge of becoming the first player to win undisputed batting titles in both the American and National Leagues. LeMahieu enters the season’s final day hitting .359, well ahead of the AL pack. The 32-year-old earned the NL crown when he hit .348 with Colorado in 2016.

Teammate Luke Voit is about to become a more common name atop the leaderboards but part of an illustrious list, joining Babe Ruth, Lou Gehrig, Joe DiMaggio, Mickey Mantle, Roger Maris and Alex Rodriguez as New York players to top the majors in home runs. Voit has 22 homers this season, and White Sox slugger Jose Abreu is next with 19.

LeMahieu and Voit could become the first teammates to lead the majors in average and homers since Hank Aaron hit .355 and Eddie Murray slugged 46 homers for the 1959 Milwaukee Braves.

With the Cincinnati Reds headed to the playoffs for the first time in seven years, Sonny Gray (5-3, 3.73 ERA) gets a potential tuneup in the regular-season finale at Minnesota. Gray is lined up to start a decisive Game 3 in the first round Friday if the best-of-three series goes the distance.

He would follow top NL Cy Young Award contender Trevor Bauer and right-hander Luis Castillo, all three of them All-Stars, in a strong rotation that has Cincinnati optimistic about October.

“We’re going to be as much of a threat as anyone,” slugger Joey Votto said.

Washington Nationals manager Dave Martinez ends the season knowing he’ll be back in 2021 after the team announced a multiyear contract extension Saturday, his 56th birthday. Washington had a disappointing season after Martinez guided the club to a World Series championship in 2019.

“I think it’s a good match,” general manager Mike Rizzo said. “We couldn’t have hit on a more positive and enthusiastic leader in the clubhouse. I think you see it shine through even in the most trying times.”

San Francisco will finish the season without Jeff Samardzija -- the veteran pitcher was released Saturday, a day after he returned from a long rehab for a shoulder injury. Samardzija, an 11-game winner in 2019, was designated for assignment and placed on unconditional release waivers days before his contract was to expire. The 35-year-old right-hander signed a $90 million, five-year contract with the Giants in December 2015, but spent much of his tenure with the team sidelined by injuries. He was 0-2 with a 9.72 ERA this season.

“I have no doubt that he’s going to attempt to continue his career and it wouldn’t surprise me to see him go out and do really well going forward,” San Francisco manager Gabe Kapler said.

In another goodbye relevant to Giants fans, four-time All-Star outfielder Hunter Pence announced his retirement Saturday following 14 major league seasons. The 37-year-old Pence helped San Francisco to World Series championships in 2012 and 2014. A career .279 hitter, he had 244 home runs and 942 RBIs for Houston, Philadelphia, San Francisco and Texas. The Giants released him last month from a second stint with the club after Pence batted .096 with two homers and six RBIs in 17 games.

“He had a tremendous career, did a ton for the community in San Francisco and obviously for the San Francisco Giants,” Kapler said.

Madison Bumgarner hopes to finish a forgettable first season in the desert by getting his first victory with the Diamondbacks after signing an $85 million, five-year deal.

The 2014 World Series MVP is 0-4 with a 7.36 ERA in eight starts with Arizona, although the left-hander looked sharp over five scoreless innings against Houston in his previous outing. He’ll face the Rockies in the season finale.