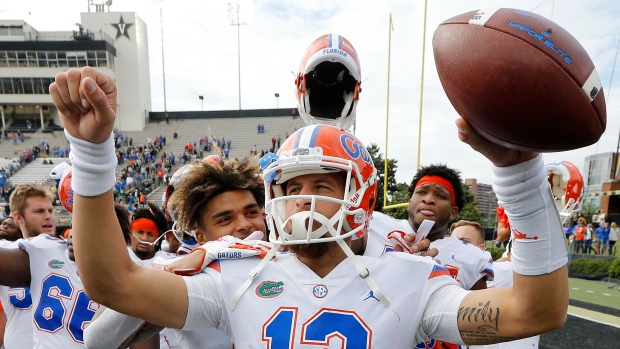 One of college football’s great rivalries will serve as the kick-off to the 2019 NCAA season on Saturday night when the Miami Hurricanes host the No. 8 Florida Gators in the 58th meeting between the two Sunshine State powerhouses and first since 2013.

You can catch No. 8 Florida vs. Miami LIVE at 7pm et/4pm pt on TSN2, TSN Direct and streaming on TSN.ca.

Manny Diaz’s Hurricanes and Dan Mullen’s Gators enter the season at contrasting points in their development and with very different expectations. While a berth in the College Football Playoffs for either program is a longshot, both teams enter the season with specific goals in mind.

It’s been a whirlwind the last few months for the Hurricanes program. On the heels of a disappointing 7-6 season last year, head coach Mark Richt caught the college football world by surprise in announcing his retirement after three seasons at the school. His final game in charge ended up being the Pinstripe Bowl at Yankee Stadium in which the Hurricanes were eviscerated 30-3 by Wisconsin.

Heading into last season, Miami appeared to be on the cusp of a renaissance. The 2017 campaign harkened back to Miami’s halcyon days of the title-winning Jimmy Johnson, Dennis Erickson and Larry Coker teams. Starting the season ranking at No. 18, the Hurricanes were up to No. 2 heading into the final week of the regular season on the back of consecutive demolitions of No. 13 Virginia Tech (28-10) and No. 3 Notre Dame (41-8) and had aspirations of competing for their first national title since 2002.

That dream came crashing down in a hurry. A trip to unranked Pittsburgh in the final game of the regular season saw Miami fall listlessly, 24-14 for their first loss of the season. Just over a week later, Miami was pulverized in the ACC title game by eventual CFP finalists Clemson to the tune of 38-3. Their season ended with a third consecutive loss in the Orange Bowl against Wisconsin.

That late-season funk carried over into 2018 when a 5-1 start was spoiled by four consecutive losses to conference opponents in Virginia, Boston College, Duke and Georgia Tech. The Hurricanes scored no more than 21 points a game during the losing streak. The seven wins to finish the season marked the second-fewest in Richt’s 18-year coaching career.

Just before Richt announced his retirement, defensive coordinator – and purveyor of the now infamous “Turnover Chain” – Diaz appeared to also be on his way out the door, having agreed to become the new head coach at Temple. But with the new vacancy in Miami, Diaz was able to get out of his agreement with the Owls and was promoted to head coach of the Hurricanes.

Diaz’s first major test at Miami's helm was naming a starting quarterback with three candidates vying for the role. Redshirt freshman Jarren Williams was able to beat out Ohio State transfer Tate Martell and sophomore N’Kosi Perry for the job.

"All three guys showed tremendous improvement and development, which is a credit to their hard work and the work of Dan Enos and his offensive staff," Diaz said of his decision. "We believe we can win with all three guys, however, we feel like Jarren has the greatest upside due to his passing ability, his instincts and his determination."

On top of it being his first start, the game against Florida represents Williams’s first real game action. His 2018 season consisted of a trio of snaps during a 77-0 blowout of Savannah State in Week 2 (in which he ran for a touchdown). At his disposal under new offensive coordinator Enos’s playcalling, Williams will have a pair of intriguing targets in last year’s top receiver Jeff Thomas and Buffalo graduate transfer K.J. Osborn.

The return of Thomas, who finished last season with 563 yards on 35 catches and two touchdowns, seemed unlikely. Away from the team for its final two games (it remains unclear by whose accord, his or Richt’s), Thomas appeared ready to transfer to Illinois, but pulled a U-turn to stay with the Hurricanes. Osborn gets to play under the spotlight of the ACC after four years with the Bulls. For Buffalo last season, Osborn hauled in 53 passes for 892 yards and seven TDs. The addition of Osborn could free up focus on Thomas and allow Williams to quickly develop a rapport with both targets.

In looking at the ACC Coastal, the Hurricanes will like their chances in what is likely going to be a wide-open division with the defending national champion Tigers in the Atlantic. A berth in the ACC title game is a realistic goal and a benchmark towards which Diaz’s team will undoubtedly be aiming.

Like the Hurricanes, the Gators have the fortune of being in the weaker of its conference’s two, but it’s still the SEC and Mullen’s team will have to deal with No. 3 Georgia and good Mizzou and South Carolina teams in order to reach the conference title game.

The straw that stirs the drink for the Gators will again be monstrous QB Feleipe Franks, a player who has yet to live up to the lofty expectations Gators fans had envisioned when he came to Gainesville two years ago, spurning LSU.

The 21-year-old Franks came perilously close to losing his job to Kyle Trask after a Week 9 disaster against Mizzou that saw him complete just nine passes in a 38-17 loss during homecoming. A season-ending injury to Trask meant that Franks retained his job and he finished the season strong, throwing for eight TDs and rushing for four more in the final four games of the season as the Gators went 4-0.

While Franks will be without four members of his offensive line from 2018, star receiver Van Jefferson returns for his senior year and he’s excited to once again work with Franks.

“I think Feleipe is a great quarterback” Jefferson told ESPN Radio’s The Paul Finebaum Show this week. “I think Feleipe is going to be one of the best quarterbacks in the country. He’s locked in and dialed in this whole week and through fall camp, man. He’s locked in. He has a different persona about himself, man. He’s ready. He’s locked in. He knows what he has to do. This is his second year in the offence. I think he’s going to surprise a lot of people with what he can do.”

The return of Jefferson is a boon for the Gators. A transfer from Mississippi ahead of last season, Jefferson hauled in 35 catches for 503 yards and six TDs last season and will be looked upon to help spearhead the offence with senior running back Lamical Perine. As a junior last year, Perine ran for 826 yards on 134 carries with seven TDs and added 170 yards receiving.

If the Gators are going to post double-digit wins in back-to-back campaigns for the first time since 2008 and 2009, a good start for the team will be imperative. Looking ahead at Florida’s schedule, Week 7 and Week 8 will likely tell the tale this season for Mullen and co. with a date against Auburn at homecoming, followed by a trip to LSU.

But before that there is the opener with the Hurricanes. Last time out between the Gators and Hurricanes in 2013, it was Miami pulling off a 21-16 upset of the No. 12 Gators. In fact, the Hurricanes have won seven of their last eight meetings dating back to 1986 with Johnson at the helm and Vinny Testaverde as quarterback.

The Hurricanes lead the all-time series between the two teams, 29-26.