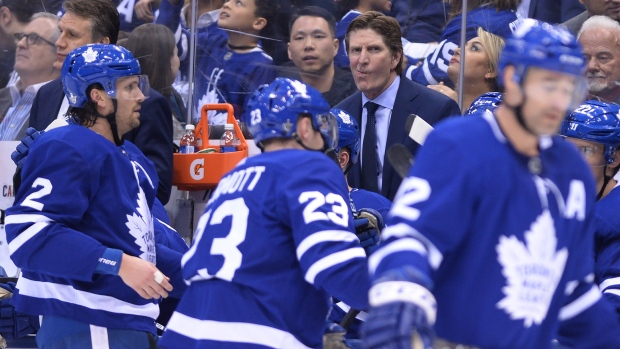 According to TSN Hockey Insider Pierre LeBrun, Toronto Maple Leafs head coach Mike Babcock does not have an out-clause in his eight-year contract with the team.

LeBrun's report on Wednesday ended speculation that such a clause may exist and he adds that Babcock "remains as committed as he’s always been to see things through with the Leafs and try to bring a Cup to Toronto."

There’s been some speculation the last few months about whether Mike Babcock has an “out” in his contract. I’m told he does not. Besides that, I’m told Babcock remains as committed as he’s always been to see things through with the Leafs and try to bring a Cup to Toronto.

Babcock and the Maple Leafs were eliminated from the first round of the playoffs for the third straight year on Tuesday, falling in Game 7 to the Boston Bruins for the second straight season.

"We've got to push through this because you can't be talking after a playoff series that you're going home," Babcock said after Tuesday's loss. "That's the bottom line. We've improved our team drastically, you've witnessed it. This series we were a way better team than we were a year ago, but we're at the same point with the same result here today, and so that part is disappointing."

Babcock, 55, completed the fourth year of his contract with the Maple Leafs, who finished last in his first season behind the bench in 2015-16. The team finished second in the Atlantic Division in each of the previous two seasons.

He is currently the NHL's highest-paid head coach with a salary of $6.25 million.