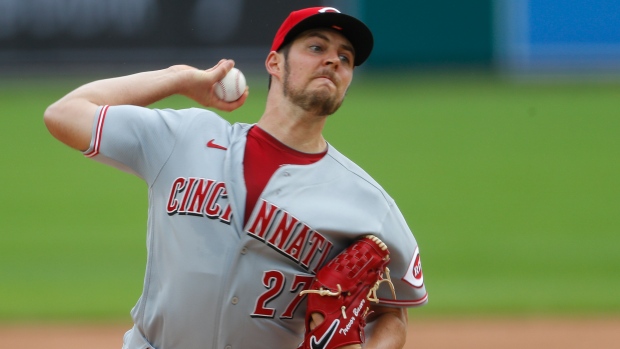 TORONTO — It’s no secret which area of the roster is going to be the difference between the Toronto Blue Jays treading water as an 80-something win team over the next couple of years and one that joins the league’s elite.

The rotation – and the impact it has – will be everything.

There are a handful of options on hand, and arms like Nate Pearson and the recently re-signed Robbie Ray provide upside if things click.

Veteran right-handers Ross Stripling and Tanner Roark are also around to eat innings and would be pencilled into Charlie Montoyo’s five-man rotation if the season were start tomorrow. Thankfully, it doesn’t because the Jays’ pitching staff is far from a complete picture.

When you consider the earned run averages of those four aforementioned names last season –Pearson (6.00), Ray (6.62), Stripling (5.84) and Roark (6.80) – it’s pretty easy to see why GM Ross Atkins is making starting pitching the priority once again in what’s expected to be a very slow-moving offseason.

It’s the names at the top of the market that interest Atkins, and another Ryu-type investment is likely if the market allows for it.

Whether that’s the jewel of the starting pitching market, Trevor Bauer, or one of the many mid-rotation or reclamation options remains to be seen.

“At this point, it’s about quality,” Atkins said. “We feel good about the quantity and need to be focused on the quality of how we’re getting outs at this point. Pitching is an area that — I hate to sound cliché — you can never have enough of it. We feel very good about the work that’s happened over the last several years to build up that depth.

“We’re talking to just about every available free agent in the pitching category, as well as talking to teams on that front, so we’ll continue to stay in that market.”

At minimum, seven quality starting pitchers are needed for a team that fancies itself a World Series contender to get through to October. Once you get there, it’s all about impact and aces.

The Jays had enough staff depth to get through 60 games and finish four games above .500, but the lack of impact did them in once the postseason arrived.

Top-of-the-rotation starters are what everyone seeks, but you can make the argument that the Jays would be better off with two less expensive options – say, James Paxton and Jake Odorizzi – for less than the AAV Bauer is likely to command.

There are many different rotation blueprints and alternatives for Atkins and the Jays this winter, but choosing the right one is important.

Any team can spend money. Few get it right in the end.

Around baseball, the Jays are well positioned to strike and the homefield uncertainty doesn’t seem to be publicly playing a role, even if it could be a separator when a player and agent have to make a final call.

“It seems clear that they’re excited about the Toronto Blue Jays as they’re talking about us as a landing spot for their clients,” Atkins said. “From teams, it seems clear that they, in many cases, are feeling that we’re going to be in a good position to take another step. What matters is where we are, and perception is one thing and then what ends up happening is another.”

With a crucial off-season ahead for the Jays, over the course of this week I’ll take a look at five potential free-agent targets at each area of the roster, starting with the rotation.

The tags are pretty self-explanatory.

The all-in target is the best – and usually most expensive – option out there, but it’s still seen as realistic if that’s the direction Atkins wants to go, and the feeling is mutual.

The best target is the one that, in my opinion, has the chance to return the most value and should be the focus, while the likely target is a name the Jays have sensibly been connected to.

Finally, the buy-low and under-the-radar targets are options that fit either at a discounted price on a short-term deal or have the chance to provide surplus value on a longer-term contract.

After we get through the rotation options today, outfielders (Tuesday), infielders (Wednesday), relievers (Thursday) and trade targets (Friday) round out the series.

Coming off a 1.73 ERA across 73 innings and the NL Cy Young Award, Bauer is far and away the top pitcher on the market and the lone option if a team is looking to break the bank.

Heading into his age-30 season, he won’t approach Gerrit Cole levels at $324 million, but Bauer isn’t going to come cheap. MLB Trade Rumors projected $32 million a year for four years, while our own Steve Phillips projected the same on a one-year deal or $150 million over six years.

That’s part of the curiosity with Bauer — nobody is sure what type of term he’ll be seeking because of his past comments about accepting one-year deals, as well as the uncertainty of the free-agent market in general.

That could be a good thing for a team like the Jays, who may have the resources and desire to pay big on a one-year deal and then invest long-term elsewhere, but it seems unlikely Bauer will go that route.

A strong personality, the familiarity Atkins and Mark Shapiro have with Bauer from their Cleveland days will likely play a role, for better or worse.

Bauer is the best overall target, but money matters and signing Bauer will restrict Atkins’ ability to upgrade other areas of the roster, making it easy to question if a chase of the most expensive arm on the market is the best idea.

If there’s another pitcher available with ace upside — even if you have to really squint — it’s probably Paxton for most.

He has flashed it in the past, posting an exciting 4.4 fWAR and 2.98 ERA across 24 starts back in 2017, a season that had many projecting the B.C. lefty was ready to join the league’s elite.

Injuries, however, have consistently dogged him.

Back and elbow injuries ruined Paxton’s 2020 season, leaving an ugly 6.61 ERA across 20.1 innings on his resume, but agent Scott Boras said recently that Big Maple is on his regular throwing program this off-season.

He’s the furthest thing from a sure thing, but pitcher health is impossible to predict, and Paxton will have to settle for a short-term deal that could pay off big for the Jays.

The Jays were hot for Odorizzi last year around this time, but the former Tampa Bay Rays right-handed surprisingly decided to accept the Twins’ qualifying offer. It did not work out well.

On one hand, Odorizzi posted a 6.59 ERA and allowed too much hard contact. On the other, it was just four starts and 13.2 innings, a sample size that would mean little in a full season.

How teams evaluate the data from the shortened season will vary, but the Jays’ interest in Odorizzi probably hasn’t changed, even if his leverage has since he’s not coming off a 4.3 fWAR season like he was a year ago.

What do Bauer, Odorizzi, Kluber and the next guy on this list, Chris Archer, all have in common?

All four pitchers either have relationships with the Cleveland-imported front office (Bauer, Kluber) or manager Charlie Montoyo from the Rays’ system.

When it comes to handling pitchers and their routines, that means something.

Kluber’s 2020 season ended after just one inning when he walked off the mound with a shoulder tear, but he’s reportedly been cleared for a normal off-season.

The allure with Kluber doesn’t need to be explained.

He’s got a pair of Cy Youngs on his mantle and there’s ace upside if he can regain form.

Is that likely? Heading into his age-35 season, probably not, but many stuck a fork in Justin Verlander too early, as well.

The Jays’ desire to creatively piece together starts, and innings would make Kluber ideal, as they wouldn’t need him to be a workhorse, instead treating him carefully like they do Ryu in order to get the best out of him.

Archer has fallen apart since being traded away by the Rays, so maybe the familiarity Montoyo has with the former ace can get him back on track.

After having his $11 million option turned down by the Pirates last month, Archer is tasked with working his way back from thoracic outlet syndrome, a shoulder surgery that hasn’t been kind to pitchers.

Depending on how he’s progressing and how his health checks out, the blueprint deal for a rehabbing pitcher is a one-year deal with team-friendly option.

It’s nothing more than a dart throw, but pitching coach Pete Walker and the high-performance department can use a couple high-upside reclamation projects.​