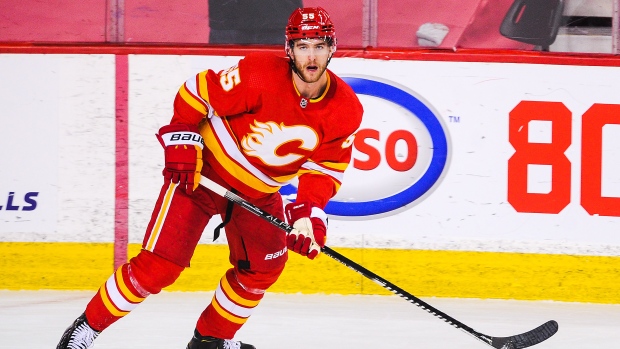 Here’s an obscure piece of National Hockey League trivia: Since the 2015-16 season, who ranks sixth in games played by a defenceman?

The answer is Calgary Flames blueliner Noah Hanifin. Only Keith Yandle, Brent Burns, Drew Doughty, Dmitry Orlov, and Ryan Suter have suited up for more games than the Boston native. Of the 10 defencemen to have played the most games since 2015-16, Hanifin (24 years old) is the youngest by five years. It’s easy to forget how young he still is.

With a new coach comes a fresh slate and first impressions for everyone on a roster, top to bottom. Whether you’re a star like Johnny Gaudreau or an established bottom-six veteran like Derek Ryan, players have an opportunity to rewrite their narratives.

Perhaps that’s even more pertinent to Hanifin and forward Sam Bennett, two players who haven’t lived up to their billing as top-five picks (Hanifin going fifth overall in 2015 to the Carolina Hurricanes and Bennett being selected by the Flames fourth in 2014) but are still useful NHLers who would have roles on pretty much any NHL team.

Hanifin is especially intriguing in this regard, given his role as a top-four blueliner. He’s a great skater, sees the ice well, and has offensive instincts, yet there always seemed to have been another level he had yet to reach. Coming into this season, his career high for points was 33, and he’d been a minus player in four of his five seasons.

“There’s not much not to like about Noah Hanifin,” Tony MacDonald, then the Carolina Hurricanes chief amateur scout, said prior to the 2015 NHL Draft. “He should play in the NHL for a long, long time.”

While Hanifin is certainly is on track to log several hundred more games, it looks like we’ll finally see an enhanced version of him under Darryl Sutter – one that builds off his already-impressive season to date.

It was expected that captain Mark Giordano and the young Rasmus Andersson would be Calgary’s top pair this season, but the strong play of the Hanifin-Chris Tanev pairing has changed that dynamic and perhaps elevated the American to the status of top-pairing NHL defenceman.

According to Natural Stat Trick, The Hanifin-Tanev duo’s on-ice goals-for percentage is 67.86, far greater than the Giordano-Andersson percentage of 45.71. Right now, Hanifin and Tanev rank first and second respectively in five-on-five ice time, and they’ve seen the lion’s share of tougher matchups as well. Hanifin has played 22:03 more against Connor McDavid than the captain, for example. Hanifin has also played more against Mark Scheifele and Elias Pettersson (Giordano has logged more minutes versus Auston Matthews and Mitch Marner).

Hanifin credits Tanev with his development this season, praising his communication and positioning, which allows Hanifin to jump into the play more.

“I feel pretty confident right now, and I think Chris has been a huge part of that,” Hanifin said earlier this season.

“He’s been a great guy for me to play with and I think he’s really allowed me to play my own game, which is being aggressive offensively and jumping into the play. He’s just always in the right position so he makes my job a lot easier back there. So right now, I’m confident and I feel good about my game.”

The key word in that answer is offensively. Hanifin had his power-play time effectively reduced to nothing this season under former head coach Geoff Ward, logging just nine seconds of time on the man advantage per game – a far cry from the 1:18 per game he had last season. In fact, Hanifin’s career high for power-play time was back in his rookie season in Carolina, when he logged 2:22 per game.

Sutter clearly sees that Hanifin has more to give in that regard, and has adjusted his role accordingly. Under Sutter, Hanifin’s playing even more at even strength (19:31 per game, up 40 seconds from before Sutter took over), logged several shifts as the team’s No. 1 power-play quarterback (leading a unit with the likes of Sean Monahan and Johnny Gaudreau) and is averaging 1:29 per game on the man advantage. He’s also getting more shifts in the offensive zone and being encouraged to shoot more (1.6 shots per game under Ward to 2.17 shots per game under Sutter). With Sutter at the helm, Hanifin has three points in six games – and surely more to come.

“I think that his strengths are the skills that are power play effective,” Sutter said on Saturday.

“I think that putting him with the Sean Monahan group gives us more speed coming up the ice for sure on that power play. I just want to see him in more offensive pictures when we play and to do that, we have to get him on the ice in those situations, whether it’s the powerplay or offensive zone face-offs.”

We hear it all the time that defencemen have a longer, more unpredictable growth curve than forwards, and you can add Hanifin as the latest example of that.

-In the Battle Of Alberta on Wednesday, we saw how an elite puck-moving goaltender can give the Calgary Flames fits. Under Sutter, the Flames game plan seems fairly simple. When entering the offensive zone, they dump the puck in hard along the boards, aiming for a puck battle in the weak-side corner, then generate chances off the cycle or shots from the point. The trouble is, Edmonton Oilers goalie Mike Smith is one of the league’s best at playing the puck. All night, he jumped out of his net, knocked down those hard rims, left the puck for an Oilers defenceman, and the Flames threat was extinguished. Carey Price is another elite puck-playing goalie and has been dubbed a third defenceman for that ability. The Flames will need to tweak that element of their game when facing goalies who can play the puck well.

-It’s rare to get such a candid glimpse into a coach’s mindset, but Sutter gave just that when asked recently about his motivation to return to an NHL bench, despite having already accomplished the penultimate prize of winning a Stanley Cup. It goes beyond the “unfinished business” he referenced in his press conference, about the feeling of flying back to Calgary from Tampa Bay after losing in Game 7 of the 2004 Stanley Cup Final. There’s more to what drives him:

“I’m interested in coaching strictly to win a Stanley Cup and that’s it. Nothing else. It’s a hard job being a head coach and it takes its toll, and the only reward for today’s coach is the light that’s at the end of the tunnel. I’ve coached a lot of games in the NHL but to me the bottom line is, ‘How many games have you coached in the playoffs? How many have you won, and how many championships? And that’s the only thing that drives me, and that’s what I believe.

“At the same time, you have a life, too. And you have to make sure it’s the right place. I’m from Alberta, my family’s from Alberta, and I said, ‘Yup that’s a good place.’”

-It’s a bit early to say if the Flames will buy or sell at the deadline (goalie David Rittich and veteran centre Derek Ryan are pending unrestricted free agents, while forward Sam Bennett is a pending restricted free agent with arbitration rights). While they’re on the outside looking in right now, it’s still a fairly tight race. Regardless, one move I think they should make is bringing in a veteran blueliner to play with rookie Juuso Valimaki. Valimaki is clearly talented and has upside, but the 22-year-old needs an experienced partner to help him out on the ice. For the entire season, he’s played with either Nikita Nesterov or, more recently, Oliver Kylington. Neither of those players is strong defensively, nor have they played many games in the NHL. The young blueliner is still learning the game at this level, including such nuances as how to read plays and defensive switches. Adding a veteran with a few hundred games under their belt will enhance Valimaki’s on-ice development, regardless of if the team makes the playoffs this season.

-Department of eye-popping statistics: On March 7 versus Ottawa, Johnny Gaudreau logged 9:56 on the powerplay alone. It was the most a Calgary Flames player has spent on the man advantage in a single game since Olli Jokinen played 10:01 on the powerplay versus the Minnesota Wild on November 8, 2011.