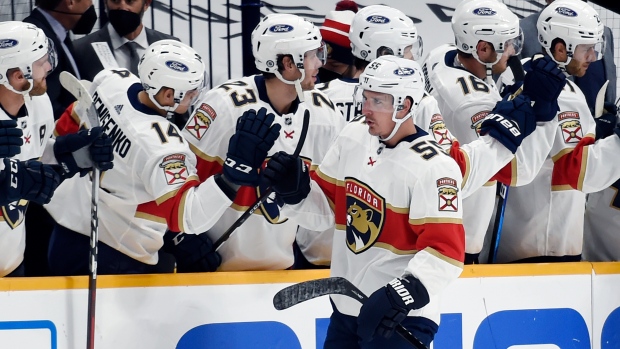 Acciari, who began the day with no points in 14 games this season, scored twice in a three-goal second period as the Panthers took the lead for good. He finished off the hat trick with an unassisted goal with 3:02 left.

Aaron Ekblad and Frank Vatrano each had a goal and an assist as the Panthers improved to 8-1-1 on the road this season. Jonathan Huberdeau also scored, and Sergei Bobrovsky made 28 saves.

Eeli Tolvanen and Viktor Arvidsson scored for Nashville, which lost its third straight and dropped to 1-9 combined against the Central Division's top three teams. Filip Forsberg had two assists, including the 200th of his career.

The Predators took the first 10 shots and didn't allow a Florida shot until midway through the first period. When Grigori Denisenko tripped Forsberg, the Predators scored 7 seconds into the man advantage with Tolvanen easily beating Bobrovsky with a slap shot to the far side of the net.

But Ekblad, coming off a four-point game, tied it with 12.6 seconds left in the first with a snap shot from the high slot at the right circle. It was all Panthers from there.

Huberdeau put the Panthers up 2-1 just 1:15 into the second with Patric Horqnvist getting his 500th career NHL point on the assist. Hornqvist got the puck in the Nashville offensive zone and passed to Huberdeau, who had enough time to deke out Rinne before flipping the puck over the goalie's right pad.

Acciari padded the lead at 11:17 of the second, finishing off a 2-on-1 with a wrist shot from the right circle. He got his second with 1:14 left in the period with a backhand past Rinne.

TOO LITTLE TOO LATE

Nashville came in tied for the NHL lead with 30 goals in the third period this season. Arvidsson made it 31 with a wrist shot in front 19 seconds into the third.

But the Predators couldn't put one past Bobrovsky the rest of the period. Vatrano got his eighth of the season before Acciari capped the scoring.

The Panthers already had the best road record through the first nine games in franchise history, and they won their fourth straight in Nashville. Florida also is 5-1-0 over the last six road games. Montreal is the only other NHL team with only one regulation road loss this season.

Nashville centre Matt Duchene was placed on injured reserve. He is expected to be sidelined for three to five weeks with a lower-body injury. The veteran has eight points in 23 games this season with a minus-11 rating.

After dropping two to the Hurricanes in Florida, the Panthers continue their road trip Sunday in Carolina.