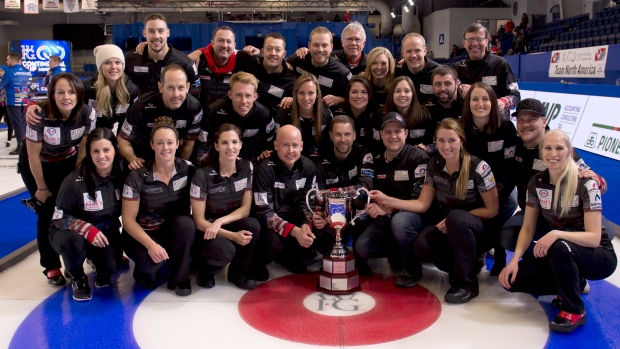 Gushue's shot was light, just getting to the top of the four foot. But Ulsrud's stone slid back to the eight-foot to give North America the win.

The four-day battle between Team World and Team North America came down to the final draw after the two sides finished tied at 30-30 in overall points.

"I threw it a little bit light, but the guys thought it should have gotten to the T-line," Gushue said of his shot. "I didn't think it was over. I did think in my head, 'boy that was slow,' and with three of what I think are the best sweepers in the world just polishing up that path, if he goes by my time he would be heavy, and sure enough that's what happened. I feel bad for him."

Team North America had victory within sight about an hour earlier with a 27-24 lead. But two of the three games in the final skins session had carryovers from the eighth ends that meant draws to the button to determine the final point.

Ulsrud kept Team World's momentum going, making a triple raise, double takeout for two in the seventh end to win the two points that were available from carryovers. He then stole two in the eighth to win the final point that resulted in the 30-30 tie.

North America's victory was its sixth straight at the tournament.