And then there were four. Get primed for the conference finals of the Stanley Cup playoffs with TSN.ca's postseason preview of each series matchup with analysis from TSN's Scott Cullen, Travis Yost and Craig Button.

It's the first time the two teams have ever met in the playoffs, but they have an interesting connection due to last season's blockbuster trade in which Martin St. Louis was traded for Ryan Callahan.

St. Louis scored a franchise-record 953 points in 972 games with the Lightning between 2000 and 2014 before moving to New York last year. He hasn't been as productive with the Blueshirts and is still looking for his first goal of this postseason. 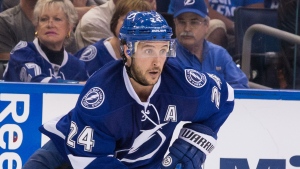 Callahan hasn't typically been a big scorer, but he had more points than St. Louis this season (54 to 52), spending much of the year on the wing with Steven Stamkos. However, like St. Louis, Callahan is still seeking his first goal of this year's playoffs. He missed Game 6 against Montreal, after having his appendix removed, but is likely to be ready for this series.

There was one other important move between the teams over the past year and it was defenceman Anton Stralman, who signed as a free agent in Tampa Bay over the summer and has been a rock for the Lightning, with the best possession stats (57.6 per cent) of Tampa Bay regulars in the postseason.

Stralman's spot on the Rangers blueline was effectively filled by Dan Boyle, the 38-year-old veteran who played 394 games for the Lightning between 2002 and 2008. Boyle has the Rangers' best possession (55.0 per cent) in the playoffs, but was knocked out of Game 7 against Washington with what appeared to be a concussion, so his availability for the start of the series is not yet known. The Rangers are also waiting on the return of winger Mats Zuccarello, who hasn't played since taking a Ryan McDonagh shot to the face in the first round against Pittsburgh.

The series boasts the second and third-leading goal-scorers from the regular season, and both have had trouble finding the mark in the postseason. Steven Stamkos scored 43 goals during the regular season and was held without a goal for the first eight games of the playoffs before tallying three goals (and four assists) in the last five games of the Montreal series. 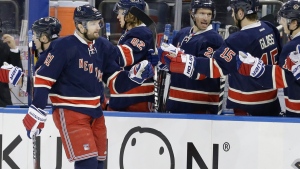 Rick Nash had 42 goals during the regular season, and while he has generated chances, Nash has scored only two goals in the playoffs.

Goals have not come easily in the playoffs on the whole, which is part of why Stamkos and Nash are having trouble, but these low-scoring games put a lot of pressure on goaltenders and that would seem to be an advantage for the Rangers, as Henrik Lundqvist leads the playoffs with a .944 save percentage. Ben Bishop has been very good for Tampa Bay, with a .931 save percentage, and outdueled Carey Price in the last round, so it's not as though he's incapable of holding up his end of the bargain.

The Lightning dominated the regular season series, winning all three games by a combined score of 15-7, but all three games were played during a two-week span ending December 1, so it's not necessarily representative of each team's current situation. The Rangers, for example, went 42-12-3 after last playing the Lightning, on their way to winning the Presidents' Trophy. - by Scott Cullen

Tampa will challenge the New York Rangers with speed and quickness - more so than in a physically grinding team like the Caps. Stepan and Brassard are much more capable than Plekanec and Desharnais of holding their own against Tampa's top lines. Both teams have very good depth on the blue line and while Ben Bishop has acquitted himself quite well through two rounds of the playoffs, he moves from the frying pan into the fire with Henrik Lundqvist at the other end. To win the Stanley Cup, you need to adapt to changing environments. The Rangers have shown that that capability and will return to the Stanley Cup Final in a very tight series.

It's a matchup between two well-rested teams coming off decisive series victories.

After sweeping the Minnesota Wild in the second round, the Chicago Blackhawks appear to be on top of their game. While Chicago split their goaltending duties in the first round against Nashville, Corey Crawford regained his form against Minnesota and stopped 124 of 131 shots (.947 save percentage) in the series. Ducks goaltender Frederik Andersen has played well with a .925 save percentage in the postseason, but hasn't faced a challenging workload as Anaheim has allowed 26.6 shots per game in the playoffs, lowest among teams that advanced beyond the first round. 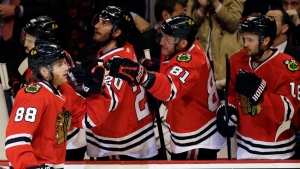 This is a series that has big names on the marquee. Patrick Kane is in top form despite missing seven weeks at the end of the regular season with a broken collarbone, and leads Chicago with 13 points in 10 games. The rest of Chicago's top performers are players that have been the cornerstones of their recent success – Jonathan Toews, Duncan Keith, Patrick Sharp, Marian Hossa and Brent Seabrook.

Anaheim's Corey Perry leads the playoffs with 15 points and Ryan Getzlaf has 12. And Anaheim has had more contributions throughout the lineup in the playoffs. Patrick Maroon has worked well with Getzlaf and Perry and the second line of Ryan Kesler, Jakob Silfverberg and Matt Beleskey shut down the Flames' top line while scoring in their own right.

Chicago also enters the series missing veteran defenceman Michal Rozsival, who broke his ankle against Minnesota, which means David Rundblad will be playing for the first time in the postseason and Chicago's top four defencemen may need to handle a heavy workload. 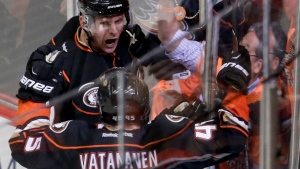 Their defensive depth is such that they are making James Wisniewski, regularly a top-four NHL defenceman, a healthy scratch.

The Blackhawks won the season series 2-1, outscoring the Ducks 8-3. It's a small sample and none of the games came after Jan. 30, which doesn't tell the story of Chicago's second-half scoring slump and Anaheim's late-season possession improvement. The Blackhawks seem to have worked out their scoring issues, while the Ducks have continued as a dominant possession team in the playoffs, controlling better than 54 per cent of shot attempts, best among teams to get through the first round (and favourably affected by playing Calgary in the second round). - by Scott Cullen

If there's one team that Bruce Boudreau didn't want to see, it's the Chicago Blackhawks. Since his first full season as a head coach in Anaheim, the Ducks have managed to control just 45 per cent of the scoring chances and 44 per cent of the shots at even-strength against Joel Quenneville's team.

I'm hesitant to pick against the Chicago Blackhawks with Toews, Kane, Keith and the cast of others who have shown unequivocally, they're capable of winning in all manner of ways. Anaheim is skilled and they bring a size presence with it where they can push through resistance when their skill may not be able to. Lindholm, Vatanen and Fowler are anything but green and Kesler gives the Ducks a very strong 1-2 centre punch. With the injury to Michal Rozsival, it puts an uneven burden on the Hawks' top four defencemen against a team that can wear down defence. I pick the Ducks to go to the Stanley Cup Final.