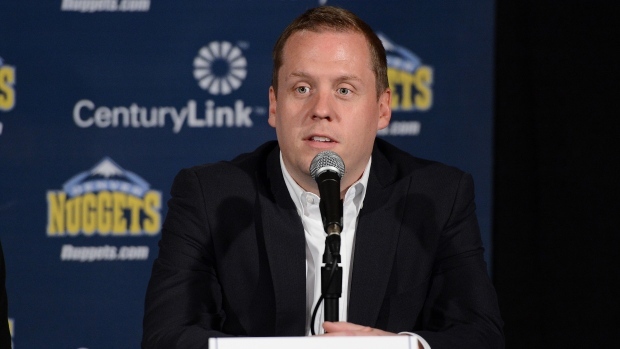 For that, extensions all around.

The team announced the move Friday for the president of basketball operations, along with Connelly's staff, in the midst of one of the best seasons in franchise history. Terms of the extensions were not released.

At 39-18, the Nuggets trail the Golden State Warriors by two games for the top spot in the Western Conference entering the All-Star break.

"We firmly believe we can bring an NBA championship to Denver, and are thrilled to continue our pursuit together," Nuggets President Josh Kroenke said in a statement announcing the extensions.

Connelly has helped orchestrate quite a turnaround for a team trying to make the post-season for the first time since 2012-13. They've become the talk of the NBA, with a do-it-all big man in Nikola Jokic and a deep roster that now includes a healthy Isaiah Thomas.

Connelly joined the Nuggets in 2013 and selected a raw centre named Jokic in the second round of the 2014 draft. He's blossomed into an All-Star who's become the centerpiece of the team. Jokic signed a max contract worth around $147 million for five seasons over the summer.

In addition, Connelly made certain in October that the squad had continuity by extending the contract of coach Michael Malone, who was in the final season of a four-year deal. Under Malone, the Nuggets have gone from 33 wins in 2015-16, to 40 in '16-17, to 46 last season and now this — a season for the ages in the Mile High City, with the fans turning out in high numbers.

The improvement isn't completely from out of left field: Denver missed the post-season by a spot in each of the last two seasons.

"When Tim joined us in 2013, he understood the vision that we had for the future of the Nuggets, and through his dedication our program is incredibly well positioned to compete at the highest level for years to come," Kroenke said. "Building a true championship contender in the NBA is a unique process for each franchise, and our path in Denver hasn't always been clear. But Tim, Arturas and the rest of our staff continued to work through every challenge we faced along the way.

"I hope Nuggets fans are as excited as we are about our future."