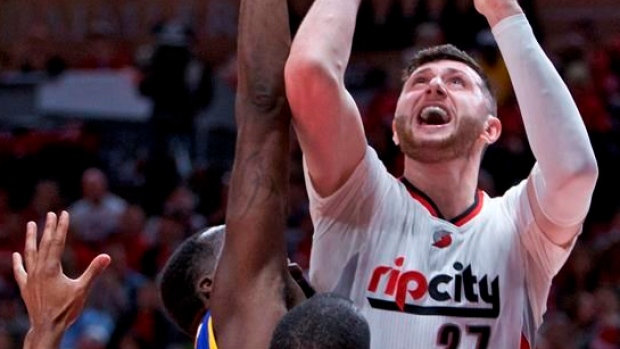 PORTLAND, Ore. — Jusuf Nurkic won't play for the Portland Trail Blazers in Game 4 of their playoff series against the Golden State Warriors on Monday night.

Nurkic missed the final seven games of the regular season and the first two playoff games at Golden State because of a nondisplaced fracture in his right leg.

He returned for Saturday night's 119-113 Portland loss in Game 3, putting up two points and 11 rebounds in under 17 minutes of play.

Blazers coach Terry Stotts told reporters on Sunday that Nurkic was tender after the game but did not do further damage.

After the game Saturday, the 7-footer known as the Bosnian Beast to fans said he was in pain.

"We know I'm not the same guy that I'm supposed to be right now," he said. "We all decided to give it a try. The start of the game was pretty OK, a little pain but I tried to fight through. The pain level was high. I played with a broke leg tonight, yeah, I played with pain."

The Warriors lead the series 3-0 going into what could be a deciding game on Monday.

Nurkic, traded to Portland on Feb. 12 from the Denver Nuggets, was averaging 15.2 points, 10.4 rebounds and 1.9 blocks in 20 regular-season games with the Blazers.

He is credited with helping Portland's post-All-Star break surge, when the team went 18-8 and finished at .500. With the big man in the starting lineup, Portland was 14-5.

The absence of Nurkic has hurt the Blazers in the playoffs, giving Portland fewer weapons against Warriors starting centre Zaza Pachulia and primary backup David West.

Nurkic became the first Trail Blazers player to average 15-plus points and 10-plus rebounds in his first 20 games with the team since Mychal Thompson in 1978.