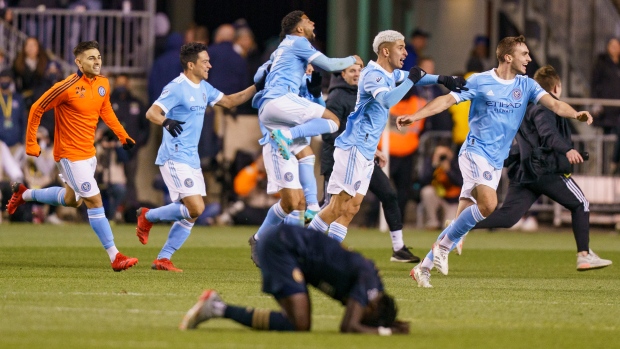 PORTLAND, Ore. (AP) — The Portland Timbers are leery of NYCFC’s Taty Castellanos as they prepare for Saturday's MLS Cup final.

Castellanos was handed a red card in the conference semifinals against the top-seeded New England Revolution, which NYCFC won on a penalty shootout after a 2-2 draw.

So he was unavailable last week during the team's 2-1 victory over the Philadelphia Union, which secured NYCFC a place in the MLS Cup final for the first time.

“Every striker, the main target is to help the team to try to score as many goals as you can, and have the confidence on the field to be able to score. He's done that,” Timbers coach Giovanni Savarese said. “He’s a competitive player and he’s shown that during the season.”

Castellanos won the league's Golden Boot by virtue of a tiebreaker: His eight assists gave him the award over D.C. United's Ola Kamara, who also finished the regular season with 19 goals, but with five assists.

Castellanos scored six goals in NYCFC's last four regular-season games. The team finished 14-9-11 for the fourth seed in the East.

“I’ve talked a lot about Taty before and always he’s a very important player for us," NYCFC coach Ronny Delia said. “His value is one thing, on the pitch, you see how he is fearless. And he’s very physical. He’s a killer. And that’s a thing that gives the whole team energy and belief.”

The Timbers were also seeded fourth after going 17-13-4 in the regular season. Portland downed the top-seeded Colorado Rapids on Thanksgiving Day before beating Real Salt Lake 2-0 at Providence Park to win the Western Conference and secure home field for the final.

Portland is not putting all its focus on Castellanos, quite the contrary.

"They have (Santiago) Rodriguez, they have (Jesus) Medina, they have Maxi Moralez, they have Magno (Bacelar Martins) that comes from the bench, they have all the guys from the bench as well that can change the game," Savarese said. “So we cannot concentrate only on one player. For us, the most important thing is to make sure that all the players in my team, they know every player that we’re going to play against, to know their strengths, their weaknesses, and the way we want to defend the ball and the way we want to attack.”

The Timbers have long enjoyed a unique atmosphere at their home field, dating back to when the team was part of the North American Soccer League in the late 70s.

The Timbers Army supporters group and the atmosphere the fans create — with constant singing, drumming and chants — lend the team a unique advantage.

“This place is going to be an amazing place that I think not only is going to show in the United States how much soccer has grown but I think it’s going to be, for everyone watching internationally, a great event for what Portland is used to on a constant basis,” Savarese said.

Both teams enter Saturday's game on notable streaks. Portland has allowed just two goals over its last six games. The Timbers have won all six of those games.

NYCFC is undefeated in its last eight.

“We want to look to put those eight games together and make it nine because now we understand the moment and understand what we’ve been working so hard for,” NYCFC goalkeeper Sean Johnson said. “But I think to everybody here, it would be worth it more so than anything Saturday to get that ultimate last win.”

Diego Valeri has been a mainstay for Portland since 2013. He was with the Timbers when they won the MLS Cup in 2015, scoring in the opening moments of the 2-1 victory over the Columbus Crew.

He was named the league's MVP in 2017 after racking up 21 goals and 11 assist. Known as “El Maestro,” he's been embraced by Portland.

But at 35, Valeri is facing the inevitably of hanging up his boots. An MLS Cup trophy would be the perfect way to end his career.