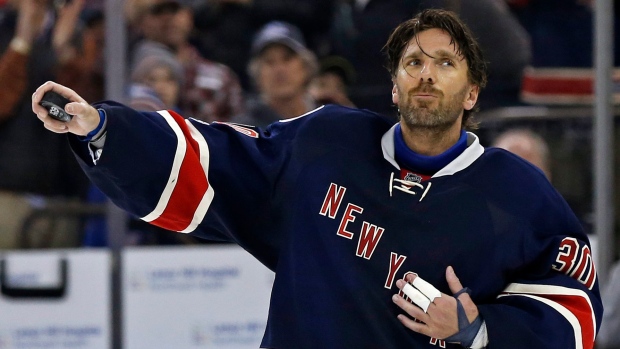 Henrik Lundqvist has spent his entire 13-year NHL career with the New York Rangers, but he was given the option to make a change earlier this year.

Madison Square Garden executive chairman Jim Dolan told the New York Post the Rangers offered to move Lundqvist ahead of the trade deadline if he didn't want to be a part of the team's impending rebuild.

“We told Hank that if he didn’t want to ride it out through this process, we’d find a good landing place for him,” Dolan told Larry Brooks of the Post. “But he said that he wanted to stay and see it through.

“I’m very happy that’s the way he feels. I think with him at the top of his game, that gives us our best chance of competing for a playoff spot next year.”

The Rangers announced their intentions to enter into a rebuild in an open letter to fans in February and soon after the team parted with multiple key pieces including captain Ryan McDonagh.

The 36-year-old Lundqvist finished the season with a 26-26-7 record with a .915 save percentage and a 2.98 goals-against average. The 2012 Vezina Trophy winner enjoyed a dominant stretch from November to mid-January, posting a .932 save percentage, but he could only carry the team so far.

“I think Hank was able to keep us in the playoff race when we probably didn’t really belong there the way the team was playing,” Dolan said. “Having him in place gives us a great foundation going forward.”

The Rangers said in February their goal is to bring in "young, competitive players that combine speed, skill and character." The team is reportedly on the verge of signing 23-year-old Swedish forward Michael Lindqvist and have also been linked to 35-year-old Ilya Kovalchuk.

A four-time All-Star, Lundqvist is second among active goaltenders in wins, behind Florida's Roberto Luongo.