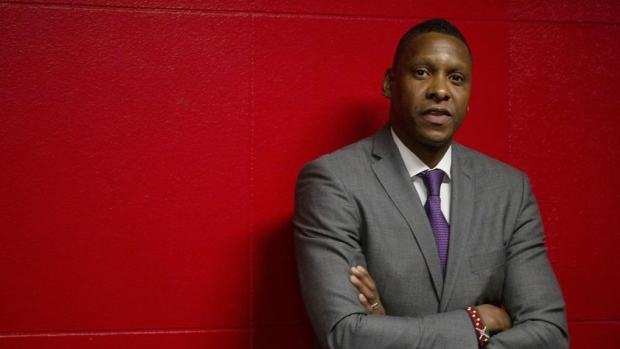 An Oakland police officer who was involved in a physical altercation with Toronto Raptors president Masai Ujiri at Oracle Arena following Game 6 of last summer's NBA Finals is now suing Ujiri and Maple Leafs Sports and Entertainment, the Raptors' parent company, for what he is alleging to be serious injuries to his body and nervous system that have led to "permanent disability."

In a lawsuit filed on Friday in Sacramento at a California United States District Court for the Northern District of California, Alan Strickland filed a complaint on six counts and has asked for a jury trial.

At the June 13 game in which the Raptors claimed their first ever NBA title, Strickland alleges that Ujiri hit him in the face and chest with both fists as Ujiri attempted to get onto the court to celebrate with his team despite not being properly credentialed.

The suit claims that Ujiri's actions were "foreseeable" due to his “previous altercations involving similar circumstances" and MLSE and the Raptors are also named for failing to adequately warn Strickland of Ujiri's “violent predisposition” and “propensity for physical violence prior to his [the assault on Strickland].”

A spokesperson for the Alameda County Sheriff's Office confirmed to the Toronto Star's Dave Feschuk that Strickland - whom the department has never identified by name since last summer - is currently on medical leave.

Among the damages sought by Strickland are for medical expenses and lost wages.

No criminal charges were filed against Ujiri.