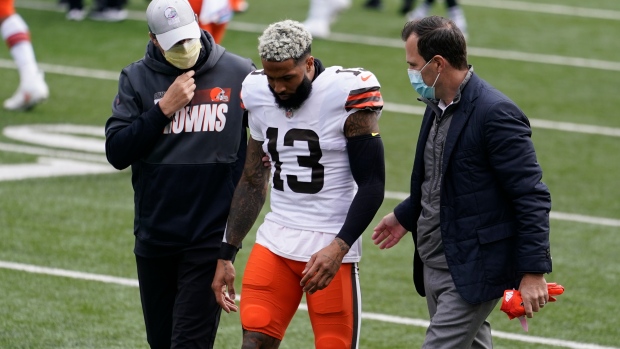 Cleveland Browns wide receiver Odell Beckham Jr. injured his left knee on the Browns' second snap of their game Sunday while attempting to chase down a Cincinnati Bengals defender after a Baker Mayfield interception. Beckham was officially ruled out for the game, a 37-34 Cleveland win.

Beckham is scheduled to undergo an MRI on Monday morning. The Browns did not have any definitive diagnosis after Sunday's road win, a source told ESPN's Adam Schefter. "Sometimes [it's] hard to know for sure," the source said. "Obviously, hope we dodge a bullet."

Browns coach Kevin Stefanski said he wouldn't offer his opinion on the injury.

"I'm going to wait for the MRI before we know," Stefanski said. "I would not speculate."

On Mayfield's first attempt of the game, he tried to a force a pass to Beckham down the sideline. The ball, however, was underthrown and picked off by Darius Phillips. Beckham turned around to chase Philips the other way but crashed into Phillips and Cleveland fullback Andy Janovich, who was trying to make the tackle.

Beckham was then escorted to the locker room by the Browns' training staff. Center JC Tretter also went down on the same play but returned for the next series.

"I'd be lying to say that I was not beating myself up about it," Mayfield said. "To go into halftime and see him, and I told him I love him, and he said, 'Go be great.' That was what he left me with to open up the second half. That was something I continued to remember throughout the second half."

It was the second consecutive game in which Mayfield was intercepted on his first passing attempt. Minkah Fitzpatrick intercepted Mayfield for a pick-six in Pittsburgh's 38-7 victory over the Browns last weekend. On Sunday, the Bengals converted Mayfield's turnover into a touchdown on Joe Burrow's 1-yard scoring run.

Mayfield picked up his play however, finishing 22-of-28 for 297 yards with five touchdowns and the one interception as the Browns improved to 5-2.