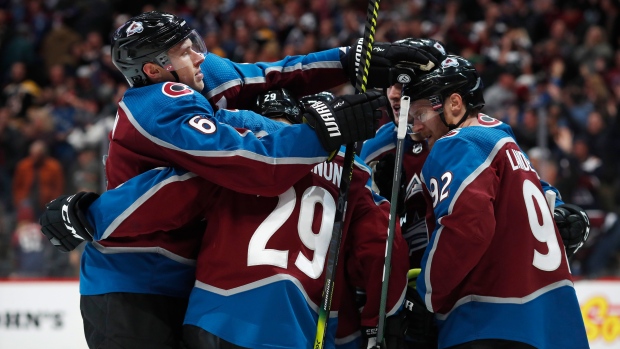 Two weeks into the regular season, I think it’s fair to assume no one expected the Colorado Avalanche, Buffalo Sabres and Edmonton Oilers to be leading the rest of the National Hockey League field.

We tend to see early-season runs each year from a team or two – last year, the Sabres led the entire NHL through American Thanksgiving, then followed that up by being the worst team in the league through game 82 of the season. So yes, some of these runs can be fleeting.

What’s particularly interesting is how many of the teams that we expected to be on the fringe of the playoff cut line (or, worse) are currently sitting atop the standings. We don’t want to make sharp judgments based on eight or so games of data, but these teams have already bagged a serious number of points to put daylight between themselves and the competition in the standings. Even if you are bearish on these clubs, the reality is their playoff probabilities have increased in a matter of weeks.

That brings us to the million-dollar question: Which of the surprise teams are real, and which are not? We have to adjust our prior expectations at this point in the season, but how much should we adjust them based on two weeks of win-loss records? This is where more predictive and larger-sample underlying numbers can really be beneficial.

Below, quick thoughts on the three teams:

Of the four teams hanging around the top of the standings, the least surprising has to be Colorado. The Avalanche made the playoff cut last season by the thinnest of margins, finishing just a handful of points ahead of the Arizona Coyotes. But an impressive playoff run, easily dispatching the Calgary Flames in Round 1 and taking the San Jose Sharks to a Game 7, resonated around the league. Their roster makeup – an impressive combination of developing young talent and a couple of unquestionable superstars – qualitatively makes you believe their hot start is just a continuance of the promise we saw a season ago.

It is hard to find a real flaw with this team. They outshoot and out-chance their opponents on a regular basis, have one of the league’s better penalty-killing units, and the goaltending tandem of Philipp Grubauer and Pavel Francouz has posted a 92.8 save percentage (seventh in the NHL). Grubauer will shoulder a larger role for the first time in his playing career, but he’s been consistently above average when it comes to denying shooters since entering the league back in 2012-13.

The Nathan MacKinnon and Mikko Rantanen duo has been predictably electric, each with 11 points in just eight games. But the Avalanche are also getting contributions further down the lineup – Andre Burakovsky, Joonas Donskoi, and Nazem Kadri have seamlessly integrated themselves this season, and 20-year-old Cale Makar already appears ahead of schedule on the blueline.

I’m buying all of the stock I can in Colorado.

This isn’t the Sabres of a year ago – a team that rode lofty shooting percentages early in the season, only to watch their huge shot volume disadvantage (along with an inexplicable cratering in performance from the goaltending duo of Carter Hutton and Linus Ullmark) ultimately win out. Last year’s Sabres team was fatally flawed: they had one ultra-productive line trying to smooth over depth issues in the forward ranks and a ghastly defence that was seemingly incapable of moving the puck.

Buffalo’s blueline overhaul may end up being one of the biggest stories of the 2019-20 season. Adding Colin Miller and Henri Jokiharju – two guys with some holes in their off-puck game but incredible puck movers and north-south transitional players – has alleviated a huge defensive burden from their forward class. Jokiharju, in particular, has completely reshaped Buffalo’s ability to take the game to their opponents when their best players are on the ice. Paired predominantly with Marco Scandella, the Sabres are getting a whopping 55 per cent of shots with their third unit on the ice.

Buffalo’s season-to-date measures are as follows:

Those aren’t the type of numbers we expect to see from teams that are lottery bound. There is surely some puck luck blessing this team on the defensive side, as the Sabres are stopping more than 95 per cent of shots at 5-on-5 and nearly 93 per cent across all situations. Turn your opponent into a team that can only convert on five to seven per cent of their opportunities and you’ll have a chance to win on most nights. The only problem is that these stop rates are well outside of our expectations for both the team and the goalies, and we did see this same exact thing happen last season.

But the best way to combat an inevitable save percentage regression is to spend more time in the offensive zone, which serves to both apply pressure on the opposition defensively and ease the pressure on the defensive side of the game. This Sabres team has shown they are capable of doing just that, and that’s materially different from what we have seen from other Buffalo teams for most of this decade.

The Sabres still don’t seem like a great pick to finish inside of the top three in the division, but they can pass the bar of wild-card calibre. That’s quite impressive in a division with the likes of the Tampa Bay Lightning, Toronto Maple Leafs, and Boston Bruins.

I will say this much about the Oilers: I don’t think the Pacific Division is really impressive outside of the Vegas Golden Knights, so there’s a real opportunity for even a depth-challenged team to try and steal one of the two other playoff spots. While I think the lineup is fatally flawed, the Oilers’ first line is on a perpetual heater and the goaltending combination of Mikko Koskinen and Mike Smith has held up so far.

If both don’t sustain, Edmonton is going to have a hard time staying afloat. Consider their performance numbers through the first nine games with both of those as major positives:

I think the Oilers will continue to have one of the best lines in all of hockey – magic is being made anytime one or both of Connor McDavid or Leon Draisaitl is on the ice (they have 37 per cent of the team’s goals so far this season). But the Oilers are still only getting about 40 per cent of the goals when those players are shelved at 5-on-5, and at some point, the usage for their big guns may come back to haunt them.

Unlike a team like Buffalo, though, the Oilers are still being broadly outshot and out-chanced, and polarizing power-play performances seem to be something of a wash. The depth issues that everyone feared would lower this team’s ceiling haven’t left – they’ve just been masked over by incredible individual efforts, which are quite fleeting historically.

Still, the points are in the bag, and the division doesn’t offer up a tremendous amount of competition. That can’t be understated enough. The Oilers may be a flawed team – more flawed than the standings would suggest – but the hot start has given them an early leg up on the rest of the field, and they might be able to hang around in the playoff race for quite some time as a result.