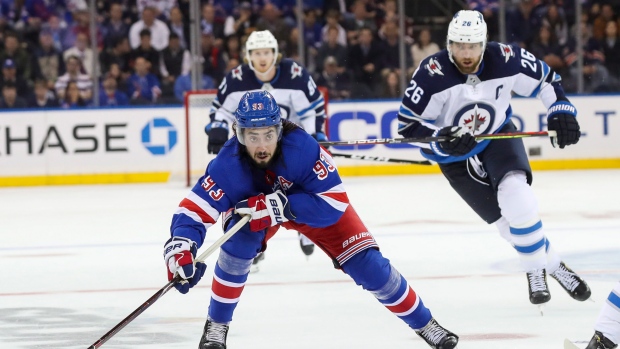 The first week of the 2019-20 NHL regular season is in the books, and to say it delivered would be an understatement.

Through Sunday’s action, games were seeing more than six goals scored per game – right in line with the continued offensive growth we’ve been studying over the years. It hasn’t always been pretty defensively, but it certainly made for some compelling and entertaining hockey. (On Saturday night, Montreal and Toronto combined for the most exciting 65 minutes of action in recent memory.)

It will take more time to really get a feel for each team around the league, but we’re already seeing some trends manifest. Below, I’ve compiled four of the most important takeaways from the opening week – the stats you need to know as the season rolls out.

Let’s start on Broadway, where there may be a new Swedish king.

1. Mika Zibanejad explodes out of the gate

It would be awfully difficult to find a player who had a better first week than New York Rangers centre Mika Zibanejad, who in a pair of games against the Winnipeg Jets and the Ottawa Senators, racked up eight points (4 goals, 4 assists) en route to two Blueshirts victories.

This wasn’t just a player being in the right spot at the right time. Consider some of the highlight-reel goals Zibanejad put together – somehow this ridiculous dangle wasn’t nearly as impressive as his line’s tic-tac-toe goal, which looked cut fresh from the 2007-08 Detroit Red Wings highlight package.

Some of the scoring did come from special teams, but the chemistry from New York’s top line will be something to watch at even strength. In prior rebuilding years, it never felt like New York’s top lines could match up head to head against some of the superior competition around the league. But with Zibanejad centring a line featuring the up-and-coming Pavel Buchnevich and an established superstar in Artemi Panarin, the Rangers now have real scoring credibility up top.

The 26-year-old has certainly come into his own as a player in New York, embracing a bigger role and acting as one of the team’s veteran players. While the Rangers must love Zibanejad’s evolution, Saturday’s game for the Senators – who traded him for a declining Derick Brassard back in 2016 – must have been a tortured moment.

The best rivalry in hockey right now is between the San Jose Sharks and Vegas Golden Knights, two fantastic hockey teams that utterly despise one another. I mean, William Karlsson and Joe Thornton were fighting. Enough said.

San Jose retains bragging rights over last year’s incredible comeback in the first round of the Stanley Cup Playoffs for some time, but Vegas is certainly doing everything they can to whitewash what happened last April. In their season-opening back-to-back, the Golden Knights ran roughshod over their Californian rival. Consider the numbers from the home-and-home for just a moment: 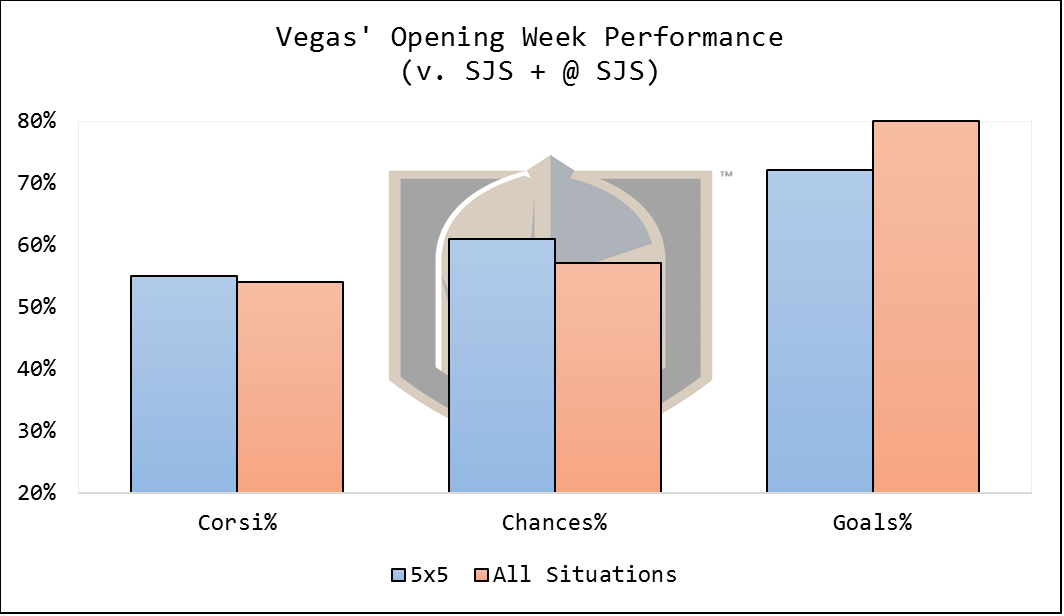 Perhaps the most intriguing part – scary, I suppose, if you are a fan of another Western Conference team – from the series was that Vegas’ top line was impossible to slow down. The trio of Jonathan Marchessault, William Karlsson and Reilly Smith combined to win 65 per cent of the shot share and 73 per cent of the expected goal share. Most of their minutes came against the Tomas Hertl line and a rotation of defenders, including Brendan Dillon, Brent Burns, Erik Karlsson and Marc-Edouard Vlasic.

We talked last week in our divisional previews about what the addition of Mark Stone meant not just for the quality of the Golden Knights’ second line, but also for unloading some of the offensive burden for a top line that did go through stretches of slowed production last season.

The Toronto power play is humming

This summer, I wrote about why I thought Auston Matthews had a decent chance to dethrone Alexander Ovechkin in the Rocker Richard race. The very long argument short: Matthews is the best even-strength goal scorer in the league, and if Toronto’s power play can relatively keep pace with the Washington juggernaut, then Matthews has a real shot to win on volume. (Assuming, of course, Matthews stays healthy.)

Three games in, and Toronto’s power play looks lethal – and quite possibly an upgrade over the units from last season that posted a respectable 21 per cent conversion rate (7.8 goals per-60 minutes; 10th in NHL). In games against Ottawa, Columbus and Montreal, the Maple Leafs converted on four of their first 15 opportunities (26.7 per cent), with Matthews converting on a pair of those.

The Matthews power-play goals may not have been Zibanejad-pretty, but they were the next best thing. In the opening game against Ottawa, Matthews scored on a blistering one-timer from the right circle. He followed that up with a goal from the right circle against Columbus on Friday night – a wrister that had so much steam on it that it’s hard to believe Blue Jackets goaltender Joonas Korpisalo even saw it.

If Toronto’s offensive production on the power play marries up with their usual even strength blitzkrieg, look out.

Not shy with ice time in Edmonton

By now, there is one playbook for the Edmonton Oilers to get into the playoffs: let the superstars run amok, and hope that the goaltending combination of Mike Smith and Mikko Koskinen can deliver a respectable enough performance to push their way into one of those Western Conference wild-card slots. (I’d be remiss to note that Edmonton, for as flawed a team as they are, are not alone in the Pacific Division. Los Angeles and Anaheim are in complete rebuilds, Vancouver is in the middle of what seems to be a never-ending rebuild, and Arizona is still searching for top-end talent. There is opportunity here. Someone will end up being better than we anticipated.)

On the superstars run amok point: pay careful attention to Edmonton’s deployment this season. They are going to need to walk a very fine line when it comes to maximizing the usage of Connor McDavid and Leon Draisaitl. Every incremental minute one or both of these Oilers attackers is on the ice is a major net positive, if not because of their game-breaking abilities, than because of how poor the rest of the lineup appears to be.

Looking at some of the most-utilized forwards in the opening week, there is an early trend that I don’t suppose is going away any time soon – huge minutes for the Oilers’ big guns: 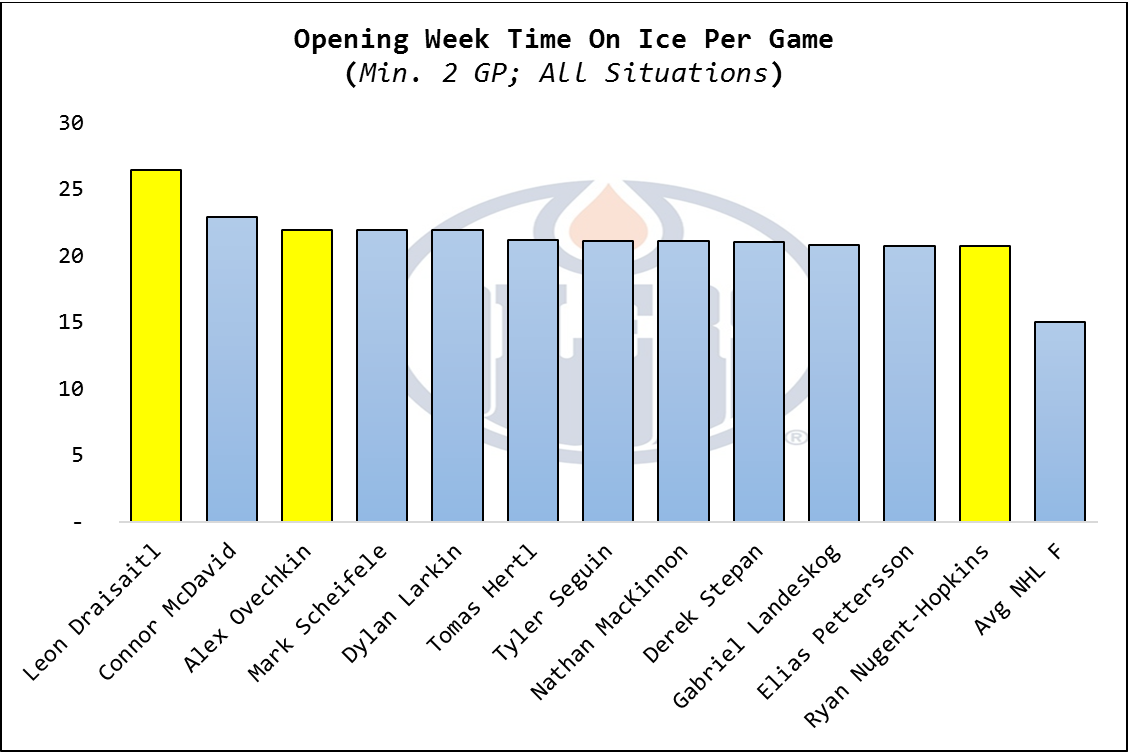 The fine line Edmonton has to walk here is obvious: How much is too much? Overloading key players in any given game may make sense. But with that strategy comes a cost, inclusive of fatigue and performance issues, and the inherent injury risk with absorbing so many minutes.

Edmonton doesn’t have much of a choice right now, and to their credit, they have opened up their season with a pair of wins. But the minutes of Draisaitl and McDavid – and I suppose Nugent-Hopkins, if this continues – should be aggressively monitored.