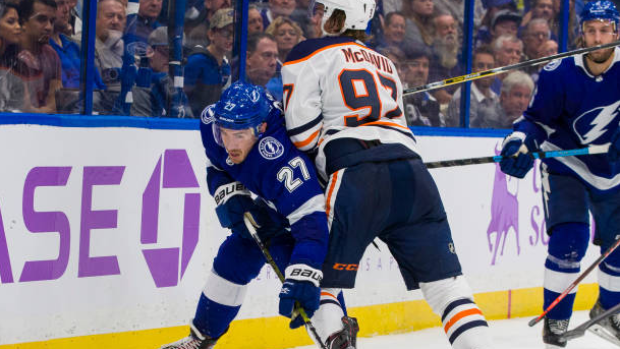 Larry Brooks of The New York Post first wrote about the potential trade that never was over the weekend, noting Oilers and then-general manager Peter Chiarelli decided against trading the fourth-overall pick for the veteran blueliner and instead dealt Taylor Hall to the New Jersey Devils in the following days for Adam Larsson. The Oilers kept the fourth-overall pick and selected Jesse Puljujarvi.

McKenzie said the Oilers looked at multiple options for the pick, including (as TSN Senior Hockey Reporter Frank Seravalli said last week) trading it to the Calgary Flames.

“It was in play even before Columbus decided to take Pierre-Luc Dubois ahead of Puljujarvi,” McKenzie told TSN Radio 1290 Winnipeg. “And to the Larry Brooks report in The Post, it’s entirely accurate that the Oilers and Rangers were talking about a McDonagh-to-Edmonton for the fourth pick. But as Larry Brooks reports, they were not interested in Puljujarvi - they wanted Clayton Keller from the U.S. Under-18 program, who plays centre, wing. That was the guy they identified in their minds that was a special player and I think a lot of people have seen that since he’s gone to Arizona.

McKenzie: Lots of balls in the air back then, McDonagh to the Oilers was one of them

TSN hockey insider Bob McKenzie joins Dustin Nielson to discuss the report over the weekend that the Oilers were close to acquiring Ryan McDonagh during and leading up to the 2016 draft.

“There was so much going on that year at the top end of that draft. To your point about Frank mentioning the whole Calgary thing, there were multiple balls in the air. I can remember being on the draft floor ahead of time and just so much going on trade-wise. Kind of interesting times.

“I think too the idea of getting McDonagh made a lot of sense for the Oilers for that fourth-overall pick, but then you start getting into, ‘Well, he wasn’t on an expiring contract, but he didn’t have that much time left and are you going to be able to sign him - American defenceman. Giving up a fourth-overall pick.’

“So anyway, there were lots of balls in the air then and McDonagh to the Oilers was one of them that the Oilers were looking at.”

Brooks wrote over the weekend that the deal would have been more than a one-for-one deal. The Rangers dealt McDonagh at the trade deadline in 2018 to the Tampa Bay Lightning, along with J.T. Miller, for  Vladislav Namestnikov, prospects Libor Hajek and Brett Howden, a first-round pick in 2018, and a conditional first-round pick in the 2019 which will become a second if the Lightning do not win the Stanley Cup this season.

McDonagh, who was signed through this season, inked a seven-year, $47.25 million extension with the Lightning last July.