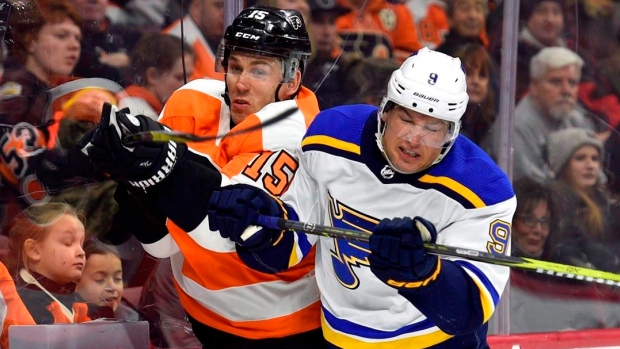 The Edmonton Oilers released winger Scottie Upshall from his professional tryout with the team on Monday.

Upshall, who turns 35 in less than two weeks, failed his medical to open camp and, though he was cleared on Sept. 17, had not appeared in any preseason contests with the team.

A native of Fort McMurray, Alta., Upshall appeared in 63 games a season ago with the St. Louis Blues, scoring seven goals and adding 12 assists.

Originally taken with the sixth overall pick of the 2002 NHL Entry Draft by the Nashville Predators out of the Western Hockey League's Kamloops Blazers, Upshall will be heading into his 16th NHL season.

Upshall has appeared in 759 career games with the Predators, Philadelphia Flyers, Phoenix Coyotes, Columbus Blue Jackets, Florida Panthers and Blues. He has 138 goals and 147 assists.

His best season offensively came in 2013-14 with the Panthers when he recorded 15 goals and 22 assists.

In other roster moves Monday, the Oilers assigned Cooper Marody to the AHL and placed Brad Malone, Keegan Lowe and Kevin Gravel on waivers for purpose of assignment.