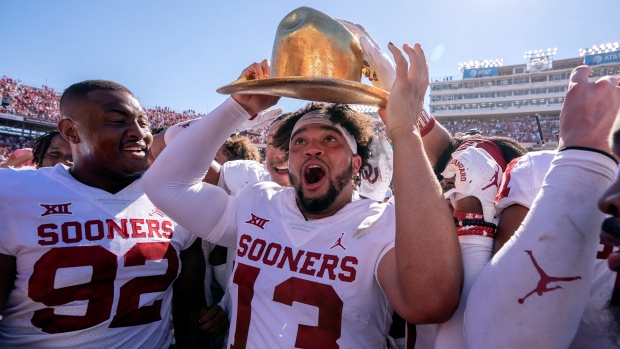 DALLAS -- — Kennedy Brooks ran for 217 yards and two go-ahead touchdowns in the fourth quarter, including a 33-yard romp with 3 seconds left, and sixth-ranked Oklahoma beat No. 21 Texas 55-48 on Saturday in the Red River rivalry that will soon move to the Southeastern Conference.

The Sooners (6-0, 3-0 Big 12) appeared to be trying to set up for a game-ending field goal when Brooks instead broke free for a sprint to the end zone.

Oklahoma hadn't even led until Brooks had an 18-yard score with 7:10 left that made it 48-41. His rush was the first play from scrimmage after OU tied the game and kicked off to Xavier Worthy, who had the ball stripped away by Caleb Kelly.

Worthy did have nine catches for 261 yards and two scores, and his 31-yard TD catch tied the game with 1:23 left before the winning drive by the Sooners.

Texas (4-2, 2-1) had a 14-0 lead less than two minutes into the game. The Longhorns, who had won three in a row since a loss to future SEC foe Arkansas in Week 2, had never lost when scoring at least 48 points.

The Sooners overcame a 21-point deficit, matching the second-largest comeback in program history. And when it was over, Oklahoma students who were part of the sellout crowd at 92,100-seat Cotton Bowl Stadium streamed onto the field to celebrate with their team.

Caleb Williams completed 15 of 24 passes for 211 yards and two touchdowns after replacing Spencer Rattler, who had two turnovers in the first half that led to Texas touchdowns. Rattler did return to throw the tying 2-point conversion after Williams' 52-yard TD pass to Marvin Mims with 7:25 left.

Longhorns quarterback Casey Thompson, whose father played for Oklahoma, was 20-of-34 passing for 388 yards and five touchdowns. Bijan Robinson ran 20 times for 137 yards and an early touchdown.