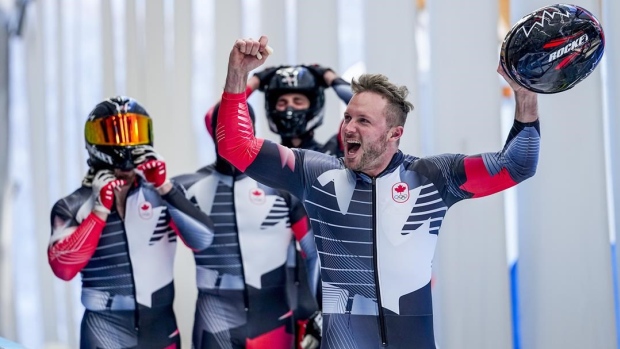 Olympic champion Justin Kripps has thrown his weight behind Canadian bobsled and skeleton athletes who are demanding change in their national sport organization, saying they "can't move forward until there is change at the top."

In an Instagram post, the 35-year-old from Summerland, B.C., wrote "The fundamental rules of governance are not being followed and thus there is no one holding the leadership accountable."

Kripps' post is in response to calls from a group of 87 athletes — and growing — for the resignation of two Bobsleigh Canada Skeleton executives: Sarah Storey, who's the acting CEO and president of the board of directors, and high performance director Chris Le Bihan.

Kripps raced to gold in the two-man bobsled at the 2018 Games and bronze in the four-man at last month's Beijing Olympics.

"I can only speak to my own experience, and while I haven't felt unsafe or mistreated, I'm aware that is not the case for many," Kripps wrote. "Winning an Olympic medal shouldn't be a pre-requisite to being treated with respect and it breaks my heart to hear the stories coming to light.

"I encourage the athletes who have had those experiences to file complaints with safe sport. We have some phenomenal athletes, coaches and staff at BCS, but clearly none of us can move forward unless there is change at the top."

Kripps' post comes on the heels of Olympic bobsled medallist Christine de Bruin telling The Toronto Star: "The whole way down the track (in Beijing), I was like F-you, F-you, F-you. I really did do it despite BCS."

Olympic bobsledders Cynthia Appiah and Chris Spring, and skeleton athlete Marela Rahneva, who was fifth in Beijing, are among the athletes who've spoken passionately about the athletes' battle with BCS.

In interviews with The Canadian Press, athletes, some of whom requested anonymity because of fears of reprisal, have raised issues with culture, safety, transparency and governance, claiming staff makes arbitrary decisions on matters like team selection based on biases, and has little concern for athlete safety, among other issues. The skeleton team, for example, competed at the Beijing Olympic test event last fall without a coach present, leading to injuries on the unfamiliar track. Many athletes were self-funded in the Olympic season, and athletes on Canada's development bobsleigh team said they didn't have access to medical treatment during several weeks of training in Whistler, B.C., including an athlete who was ejected from a sled.

BCS has said it will engage in mediation, which the athletes have rejected as a "Band-Aid solution."

The Toronto Star reported Tuesday that Canada's Minister of Sport Pascale St-Onge has ordered a financial audit of BSC and commended the athletes for daring to speak out.

St-Onge told the newspaper that she wants to ensure public funds were used in accordance with the agreement the federal government has with the sport's governing body.