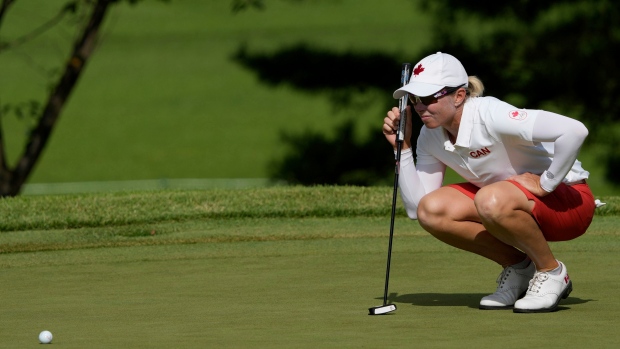 KAWAGOE, Japan — Canada's Brooke Henderson is determined to finish the Tokyo Olympics on a high note.

The product of Smiths Falls, Ont., shot a 71 to stay at par on Friday in women's golf at the Summer Games. Henderson had hoped to gain ground on leader Nelly Korda of the United States in the third round, but instead sits in a four-way tie for 40th.

"I really had to grind it out and get up and down sometimes and make lemonade out of lemons today," said Henderson. "It's just nice that I had that courage and grind in me because it's tough to keep going when you're that far down on the leaderboard.

"You're just plugging away and hopefully you can make some more birdies tomorrow."

Hamilton's Alena Sharp had a 2-under 69 to improve her standing and sit a shot back of Henderson in sole possession of 44th.

The weather has been a major factor at Kasumigaseki Country Club, with extremely high temperatures challenging players — and their caddies.

The Canadians praised their caddies for soldiering on through the heat. Henderson's sister Brittany is her caddy, while Sharp's wife Sarah Bowman is hers.

"She's holding up pretty well. She drinks more water than I do, so I'm trying to keep up with her," said Sharp of Bowman. "I think the bag is heavy and it's hot, but it helps when I make birdies and make it a little lighter for her."

To limit time in the midday sun, groups started at the first and 10th holes on Friday, allowing for the course to be clear by 2 p.m. local time when it was expected the temperature would be the highest.

Both Henderson and Sharp started from No. 10.

Henderson had a birdie and three bogeys on Nos. 10-18, but recovered after making the turn with three birdies on her final five holes. However, she ended the day with a bogey on the par-4 No. 9.

"I honestly love that front nine a lot better than this back nine," said Henderson. "I played it way better all week. I feel like there's a couple really easy birdie holes for me. "

Sharp had her three bogeys balanced out by five birdies, including back-to-back scores on her final two holes, Nos. 8 and 9.

"I feel like I played pretty solid. I hit some better shots today," said Sharp, who had an even-par 71 in Thursday's second round. "Rolled in some putts and made some good par saves.

"It's nice to finish birdie-birdie and have a 2 under, very happy with that."

The International Golf Federation warned the 60-player field on Wednesday that the tournament might be reduced to three rounds because of approaching tropical storms. Rain was expected to hammer the region starting late Friday and through Saturday, making play potentially dangerous.

Extreme heat would also make it too dangerous to play more than 18 holes in a day. Because the Olympics have a tradition of not holding any competitions once the closing ceremony begins, pushing the final round to Monday is also not an option.

Henderson’s guess was close. She will tee off at 7:11 a.m. local time, with Sharp off at 7:23, as the IGF announced an early start to Saturday’s round.