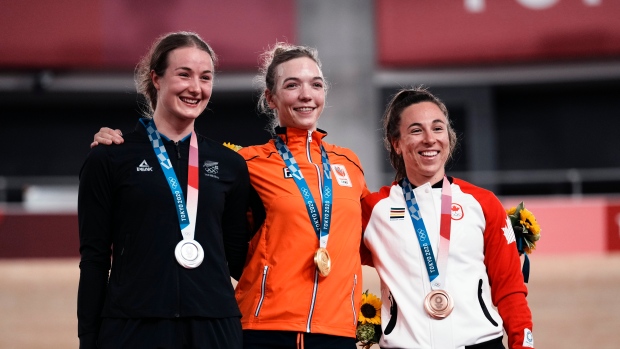 The 23-year-old from Levis, Que., took the bronze medal in the women's keirin Thursday at Izu Velodrome.

Genest crossed the line .148 seconds behind winner Shanne Braspennincx of the Netherlands and .061 back of silver medallist Ellesse Andrews of New Zealand.

“I’m pretty stoked," Genest said. "I didn’t come here today to win. I knew I could do well, but I’m very happy with the outcome and I don’t quite realize it yet.

"I’m starting to feel the high emotions and realize it, but in the moment I crossed the finish line I didn’t really know what I had done."

Genest was the second Canadian woman to win an Olympic medal in an individual track cycling race after Edmonton's Lori-Ann Muenzer captured sprint gold in 2004.

“It’s a life accomplishment, honestly," Genest said. "We work so hard every day. We train so hard and it’s amazing to see the work pay off."

The keirin, which originated in Japan as a popular gambling race, is a six-lap race of the 250-metre track.

Cyclists sprint for the win after a controlled start behind a motorized or non-motorized pacer.

Speed gradually increases over the first three laps to about 50 kilometres per hour, and then accelerates to a sprint for the final three.

Keirin made its Olympic debut in Sydney, Australia in 2000. Genest specializes in the event, having won gold in the 2019 Pan American championships.

She and Kelsey Mitchell of Sherwood Park, Alta., both raced in Thursday's final. Mitchell placed fifth among six women.

Both Canadians will also race the women's sprint starting with Friday's heats. The final is Sunday.