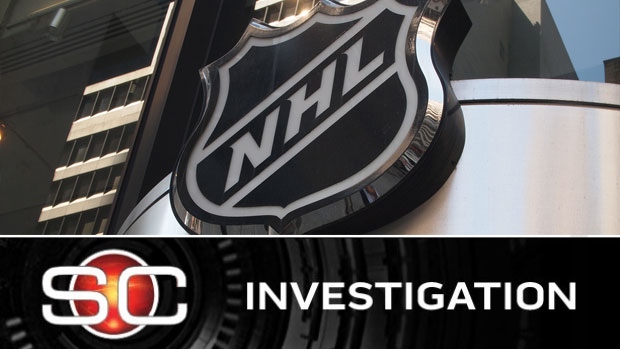 The National Hockey League, responding to what it says is a possible increased use of cocaine among its players, has kick-started talks with the NHL Players Association to add the drug and others like it to the list of banned substances for which the league regularly monitors.

"The number of [cocaine] positives are more than they were in previous years and they're going up," NHL deputy commissioner Bill Daly told TSN in an interview. "I wouldn't say it's a crisis in any sense. What I'd say is drugs like cocaine are cyclical and you've hit a cycle where it's an 'in' drug again.

During the off-season, the NHL drug-tests 60 players, the most the league is allowed to under its labour agreement.

One-third of the 2,400 player urine samples collected each year are screened more closely for drugs of abuse, such as cocaine. Those more comprehensive tests have shown cocaine use by NHL players is on the rise. Drugs, Daly said, will be a focus this season as the NHL tries to educate its players on the dangers of celebrity life.

"One major point of emphasis is party drugs like coke, ecstasy, molly, those types of drugs," Daly said. "When bad things happen, we try to address the bad things."

Effects associated with use of certain drugs

According to an NHLPA source, union executive director Donald Fehr last season raised the issue of cocaine use in closed-door meetings with numerous NHL clubs, canvassing players to ask why the drug is becoming more popular, and warning them about the health dangers and the consequences of being caught.

Over the next two months, as Fehr meets this year's crop of NHL players, he will again address the subject of cocaine, according to an NHLPA source.

Fehr said his discussions with players are confidential and noted that players would have to agree to alter their collective bargaining agreement with the NHL before the league could begin testing all urine samples for cocaine or other recreational drugs.

"We have a substance abuse and behavioural health (SABH) program which is designed to provide treatment opportunities for individuals who may have issues," Fehr said in an interview. "The nature of that program and how it operates is always subject to review, including at the present time. I discuss all potential changes to the SABH with the membership before we consider any changes to the CBA."

As matters in the NHL now stand, if "dangerously high" levels of cocaine are detected in a player's urine, the doctors who administer the league's drug program can "pierce the veil" of anonymity and directly contact a player to ask if they need help, Daly said.

Players convicted of a drug-related offense are automatically enrolled in the league's SABH program.

"The doctors decide how long you are in the program," Daly said. "It could be forever."

Doctors also decide how often players in the SABH program are drug tested.

The NHL and NHLPA aren't the only ones worried about a resurgence in cocaine use.

Last season, a senior Maple Leafs team executive met with Toronto Police Service officers to address concerns that Leafs players were purportedly using cocaine or were associating with those who were, according to two people familiar with the matter.

The NHL and the NHLPA have been dogged recently by a number of player arrests for drug-related offences. In April 2014, Tampa Bay Lightning player Ryan Malone was arrested and charged with cocaine possession and driving under the influence. Former Los Angeles Kings forward Jarret Stoll was charged this summer in Las Vegas with possessing cocaine, although he pleaded guilty to a lesser non-drug-related charge of breaching the peace.

Daly defended the NHL's handling of the Malone and Stoll arrests.

"Jarret pleaded to breach of the peace," Daly said. "In fairness, we met with Jarret. If we weren't satisfied with the answers he was giving us, we would have potentially disciplined him. We chose not to."

Malone, on the other hand, was not convicted and did not plead guilty to a drug-related offense while he was an NHL player, Daly said. In August 2014, Malone pleaded no contest to the DUI charge and received 12 months' probation, according to the Tampa Tribune. Pleading no contest is when a defendant neither admits to a charge nor disputes it. It's an alternative to pleading guilty.

Malone agreed to enter a diversion program on the drug charge. He played six games with the New York Rangers before being placed on waivers on Feb. 3, 2015.

Cocaine has been on the radar of NHL league and team executives for at least several years.

Two years ago, league officials asked Rich Clune, who this fall tried out with the Maple Leafs and who is an admitted former drug user, to speak to first-year league players about the dangers of party drugs.

"I am certainly not unique," Clune wrote in a July 1, 2015, story published on The Players Tribune website. "There are players in the NHL right now who are suffering and you would never know it from looking at their stat sheet or how hard they compete in practice. … Plenty of teammates and coaches had suspicions about me over the years, but nobody knew how bad it was. I was just the wild man. Every hockey team has one. Or 10."

Quentin Holmes, who worked as a security representative with the Columbus Blue Jackets after a 24-year career as an agent with the FBI, said most NHL teams have a good idea which players are most likely to dabble with or become regular users of cocaine.

"(Teams) know who the partiers are, it gets around," said Holmes, who worked for the Blue Jackets formally from 2011 to 2013 and said he had a decade-long relationship with the franchise.

"It's a different breed of people [players] who are coming in now," he said. "Drugs are more prevalent, that's true. ... These guys were driving old Honda Accords. … Twenty years old, and now they're driving a Maserati. They play hard and in the off-season they party hard. And they can afford [cocaine]."

Security staff at NHL head office meets each year with team-assigned security officials to brief them on which performance-enhancing and recreational drugs are becoming trendy, Holmes said.

"Every year it's a different spiel," he said. "[NHL security staff] go around and say, 'What's the most prevalent thing we're seeing this year right now?' ... They try proactively to get the guys to stop."

As tempted as young players might be by the fast, party-hard lifestyle, Holmes said veteran players are more likely to fall prey to cocaine and other recreational drugs.

"Other issues like gambling and betting are probably a lot more prevalent [in the NHL] than the drugs," he said. "You can't test for gambling. It's so hard for them to get [to the NHL]; they are pretty good about it. The young guys are like, 'It took me forever to get here. I can't jeopardize that for a drug test.' "

The increased use of cocaine by NHL players comes as the drug regains popularity throughout North American society.

In 2012, the most recent year for which statistics are available, an estimated 1.1 per cent of Canadians used cocaine, up from 0.7 per cent in 2010, according to the Canadian Centre on Substance Abuse.

In the U.S., there were 1.5 million current cocaine users age 12 or older in 2013, or 0.6 per cent of the population, according to U.S. Department of Health and Human Services data.

For the NHL, and other sports leagues, detecting the use of cocaine by players and employees is a challenge.

Dr. Bhushan Kapur, an associate scientist and toxicologist at Sunnybrook Research Institute in Toronto, said in an interview that cocaine's metabolite is only detectible in the urine for a day or two after it is consumed.

"People who want to beat drug tests know that the more water you drink after using cocaine, the faster it flushes through and out of your system," Kapur said. "It's not an easy drug to catch."

Even so, the NHL and NHLPA should find a common ground to add cocaine to the list of substances checked during every doping analysis, said Charles Yesalis, a professor emeritus of health policy and administration at Penn State University who is an expert on performance-enhancing drugs.

"Cocaine is a stimulant, like amphetamines, and is used to increase bravado, aggressiveness," Yesalis said. "Hockey is a game where that would be a benefit. Am I surprised? Absolutely not. It's not a cream puff sport. You need highly aggressive men out there."

Richard Peddie, who was chief executive of Maple Leaf Sports & Entertainment for 14 years before retiring in 2011, said the NHL needs to update its team security policies, which he said are not as sophisticated as those in the NBA.

"There's just a lot more of a security focus for the 15 [NBA players on a team] than for the 20-plus [NHL] hockey guys," Peddie said in an interview. "Hockey didn't seem to have the same focus. We had an ex-cop working with the Raptors, very plugged in with what the players are doing. … The NBA is a more controlling league with more rules."

The NBA, for instance, mandates that security officials assigned to clubs travel with those clubs on road trips, a regulation that does not exist in the NHL, Peddie said.

Peddie said it would be a mistake for the NHL to argue that the number of players who might be using cocaine only represents a fraction of the league.

"Even one positive test you have to think about," Peddie said. "These are professional athletes and they have reputations to uphold. They represent your brand, your company, in the community. I wouldn't want to pooh-pooh it."

The NHL is hardly the only league that has struggled to determine how to deal with players who use cocaine. The NFL, NBA and Major League Baseball have all navigated cocaine scandals.

Yesalis, from Penn State, said the major professional sports leagues have been conflicted over boosting both monitoring for drugs and the penalties when players are caught.

"Some of these drugs increase the quality of the product if they are selling aggressive players," Yesalis said, "and it's not good for your product to have it made public that your players are using illegal substances. It takes away the mom, apple pie, Chevrolet image. You want to portray your game as it's all hard work, and you'd want your sister to marry one of these guys. You don't want to market your employees as dirt bags."