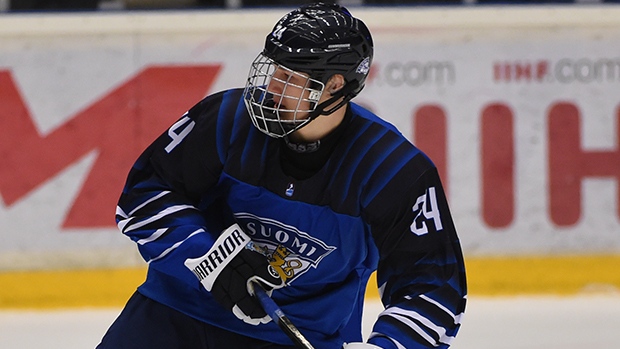 Kaapo Kakko (2019), Patrik Laine (2016), Aleksander Barkov (2013) and Kari Lehtonen (2002) have all been picked second overall in the National Hockey League draft, but never before has a Finn gone first. So, Aatu Raty enters the 2020-21 season with a chance to make history for his homeland. The Karpat centre is considered by many to be the early favourite for the top pick next year.

"To be the first Finnish player to go No. 1 overall would be a huge honour, but I don't really think about it," the 17-year-old insists. "I just work on my game and if I play well in Liiga and with the national team then it might be possible."

Raty is unfazed by the high expectations and potential distractions associated with his draft season.

"I don't feel any pressure, so I guess I don't have to do anything special to deal with it," he said with a chuckle. "You don't want to be thinking too much about mock drafts and stuff like that. You just focus on your game and if you play well then people will think you're great and draft you high."

So, he doesn't feel any pressure at all?

"No, not really," he said. "The only pressure is from myself to be great."

Raty's confidence was boosted after he made his debut in the top Finnish league this season, suiting up in 12 games and scoring twice while adding two assists. He also made a positive impact at the World Juniors, scoring twice in seven games.

Raty, who already stands 6-foot-1, 181 pounds, is determined to maintain his focus no matter what.

"Hard-working, pretty silent guy," he said in describing himself off the ice. "I don't really do much. I don't have too many friends. I'm just playing hockey and working out. That's all."

From @markhmasters: Aatu Raty enters his draft year with a chance to make history. Never before has a Finn gone No. 1 overall, but the Karpat centre could change that in 2021.

Raty spoke to TSN on Sunday via Zoom and reflected on his "weird" season. He explained why Sidney Crosby is his favourite player and how older brother Aku Raty and another Karpat teammate, Jussi Jokinen, helped guide him through his hockey development. The following is an edited transcript of the interview.

How did you feel about your season?

"It was a pretty weird year. I feel like I played super well in Liiga with the men's team and pretty well at the World Juniors, but then in the juniors [where he scored twice and posted 21 points in 30 games for Karpat's under-20 team] I didn't play that well."

Why do you think that was?

"I'm not totally sure. I feel like if I had been more patient with myself and just did easier things I would've played better. I just thought maybe I was better than I was and tried to do hard things."

What was your comfort level playing against older competition in the top league?

"It felt great being part of probably the best team in the league. We had good coaches and clear playing tactics, so it was easy to play there. Definitely gives me confidence. I was pretty nervous for the first game and didn't know how I was going to do. The first game was against one of the best teams and I felt like I played pretty well, got some power-play time so that gave me a lot of confidence and then the other games were pretty easy."

#SMLiiga: C Aatu Raty (2021 Draft) with a bomb for his second goal of the season as Karpat blanked SaiPa 2-0. He now has 2g & 2a in 4 gp. I thought he’s spend more time at the U20 level this season but clearly he’s adapting with the parent club. pic.twitter.com/fJDB9zJz18

Did you have a welcome-to-the-Liiga moment?

"No, not really, but it felt great playing with one of my childhood idols."

Who were your childhood idols?

"On our Liiga team, Jussi Jokinen played in the NHL for a long time. And then in the NHL it's Sidney Crosby, who's my all-time favourite player."

Did Jokinen have any advice for you?

"I don't know if it was before the first game, but he gave some good advice. He said, 'Just be patient and be yourself.' I kind of knew him beforehand. I had worked out with him in the summer here in Oulu for a couple years before."

"Play-making ability and skating and, I mean, his overall game. He doesn't have any holes in his game so that's why."

Is that who you model yourself after and try to play like?

So, who's your NHL role model?

"Aleksander Barkov, he's a great Finnish player. He's so good. I feel like my game is pretty close to him in my own way. I'm pretty big, a centre, I try to play good offence and good defence and have solid puck control and play-making ability."

How would you describe your style of play?

"I feel like I'm really good with the puck and can make plays. Definitely in the O-zone I make my teammates better. Lately, I've been seeing myself more and more being solid defensively and trying to be like a good two-way centre."

How do you improve that?

"Watching video and if I can play the next season in the men’s league, you definitely get better defending playing against those great players. If you want to get playing time with Karpat you got to play two ways."

What's the best part of your game?

What did you take from the World Juniors?

"The pace of game was pretty hard and there were some great players. It was cool to see Alexis Lafreniere play and all the good Canadians and players from the United States and Sweden. I think I played well because of my linemates, you know, playing with my brother and Sampo Ranta, it was a super-good line and I felt comfortable so that's why I played well."

What stood out about Lafreniere?

"He was the same player I saw in the highlights, you know, super skilled. I feel like he did everything he wanted against us."

What was it like playing with your older brother Aku at the World Juniors and with Karpat?

"We just have a connection. He fits me well. He's a hard-working winger with good skills. He's easy to play with and hard to play against."

Is there a sibling rivalry?

"Definitely. I feel like he's always been better than me in everything so I haven't really been angry with losing to him. But nowadays it’s getting pretty close in all our games like in basketball, tennis and hocke​y so it's getting pretty tight. He's more upset when he loses. I accept he's the big brother and should win. I feel like we both push each other to get better."

Did Aku, who was a fifth-round pick by the Coyotes last year, share anything about his experience with the draft season?

"Well, I mean, knowing that he did pretty well in the [development] camp in Arizona and had some fun, that gave me more confidence and made me look forward to it knowing it's not too scary."