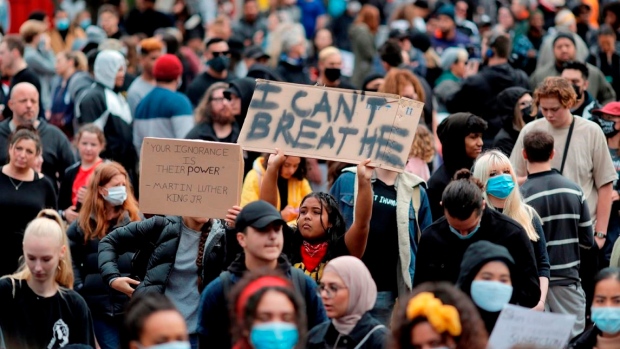 In these troubled times, I’ve heard over and over how important it is to find your voice; to speak out against racial injustice.

To which I would only add, it’s just as important, if not even more so, to lend an ear; to listen.

Because what happens if those voices calling out for justice are repeatedly ignored?

Well, isn’t that what we’re seeing unfolding in our society in real time right now? And the outcome, quite honestly, is absolutely horrifying.

Of course I’m referring to the brazen, captured-on-video killing of a black man, George Floyd, by a white policeman, Derek Chauvin, in Minneapolis on Memorial Day in the United States, while other policemen on the scene allowed it to happen.

To say nothing of the chain reaction of most everything that has happened since then.

More on that in a moment.

I know what some of you will say: Stick to hockey, old man; stay in your lane.

Alright then, for now, let’s do just that.

As fate would have it, in the time between the day (Feb. 23) black man Ahmaud Arbery was gunned down by two white men while Arbery was jogging just outside of Brunswick, Ga., and the day (May 25) Floyd died with a policeman’s knee on his neck, I had an opportunity to much better understand racism and white privilege up close and personal.

I interviewed two 63-year-old black men – Terry and Lin – and wrote what it was like for them to grow up and play minor hockey in our hometown, the then quite-white Scarborough, Ont., of the 1960s and 1970s. It is the first chapter of a book project that will be released in the fall.

Scarborough has, of course, since become one of the most racially diverse communities in Canada. It has also put as many or more (10, soon to be 11 with the imminent arrival of Akil Thomas to the Los Angeles Kings’ organization) black players in the NHL as any single Canadian community.

I wanted to talk to these two particular black men, both born in 1956, because they are exactly the same age as me. I didn’t know them personally when we were all growing up in Scarborough, but I most certainly knew of them. We shared so much in common – the same neighbourhoods; the same rinks; many of the same teammates and opponents – but our experiences could not have been more different.

Because they were black and I was white.

I can tell you one of the many things that struck me was when Terry said that enduring racial slurs and prejudice was one thing, having teammates or coaches or teachers not acknowledge that racism or affirm it was even happening to them was quite another.

In his own words, he said:

“How could you not know? Could you not see the look on my face? How could you not hear those words? That’s what makes me angry now. They said I had a chip on my shoulder. Teachers at school even said that about me. Could they all not see what was being said to me, how I was being treated? I went from being exasperated to upset to angry. It took time but I got better at articulating what my anger was about. It’s one thing if you’re my teammate and you see what’s going on and take the path of least resistance, you choose to not stand up and say something. I get that. Not everyone will put themselves out there. But when you tell me it’s not happening, or it didn’t happen? That’s when I get really angry.”

It could not have been easy for these two men to relive many of those difficult childhood experiences. Yet after they read the book chapter, Terry said it was a much-needed cathartic exercise for him. Lin said he cried as he read it.

The stories have been and are there if we choose to hear them; if we are willing to listen. For years now, decades actually, black people have been telling us the system is rigged against them, that they’re much more likely to suffer physical harm, if not death, at the hands of police than white people.

Could anyone honestly say otherwise? Now? Or ever, for that matter? The killing of Floyd has spoken truth to it like never before.

Can you imagine if Floyd’s killing wasn’t captured on cell phone video? Or Arbery’s?

Floyd’s death has become a tipping point, with week-long nationwide protests in the United States. In addition to peaceful protests, some of which have turned violent, there has been rioting and looting. Extremists, agitators and opportunists, on the left and the right, black and white, have apparently infiltrated the crowds of peaceful protesters. Some American cities are burning now like they haven’t burned since 1968.

We should not now or ever condone the violence, rioting or looting, though as Martin Luther King once said to explain it, “rioting is the language of the unheard.”

If you’re only critical of the looting and the damage to personal property and haven’t been able to muster up any empathy for a helpless man who died a horrible death, well, I don’t know what else there is to say.

If you’re suggesting the protests should only ever be peaceful in nature, let’s hope you weren’t amongst those calling Colin Kaepernick or other black NFL players “sons of bitches” for taking a knee during the anthem to peacefully protest police brutality. A protest, obviously, that fell on deaf ears for so many.

During all the strife since Floyd’s death, we have seen some wonderful examples of community policing where cops and protesters have kneeled and walked together. That is so heartening. But we’ve also seen peaceful protests turn ugly without provocation in a cloud of tear gas and a hail of rubber bullets from police. That is so disheartening.

Many white people, especially those in the hockey community, are trying to come to terms with all of this. In a lot of instances, they’re not quite sure how to proceed, exactly what to say, although more and more players are speaking up in one form or another, including Auston Matthews, John Tavares, Steven Stamkos, Tyler Seguin, Morgan Rielly, Blake Wheeler, Jonathan Toews, Logan Couture and Jason Zucker, amongst others.

And there have been black NHL players – J.T. Brown, Evander Kane and most recently Akim Aliu, amongst so many others – who for years have been taking stands, sounding alarms and speaking out on their own experiences and the truth about racism in hockey.

As for what’s happening now in the wake of Floyd’s death, one would like to think there are a handful of basic premises that any empathetic human being of any colour should be able to agree on. Such as:

- It came at the hands of those who are supposed to serve and protect, underscoring systemic and institutional racism.

- The judicial follow-up to Floyd’s death from the outset, in the words of socio-political commentator Bakari Sellers, was some “weak sauce”; that the fact the Minneapolis police officer who kneeled on George Floyd’s neck and killed him was charged with lesser third-degree murder and manslaughter — not first- or second-degree murder; that the other three policeman on the scene who permitted it to happen, amazingly, still hadn’t been arrested or faced charges more than a week after the fact.

And, finally, white people can’t possibly know what it’s like to be on the receiving end of such virulent racism but we can show humanity and support by speaking out when we see it, acknowledging it’s real and committing to help with real and tangible efforts at necessary reform on so many levels of our society.