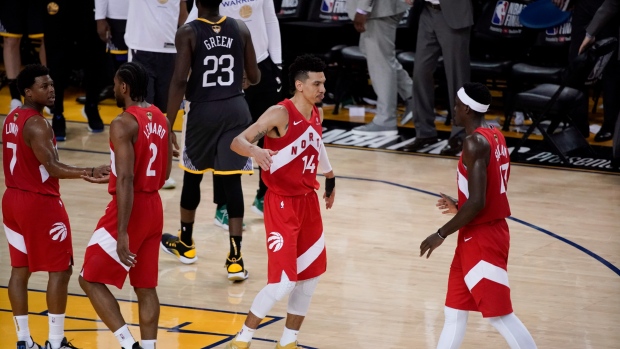 SAN FRANCISCO – As the buzzer sounded inside Oakland’s Oracle Arena, maybe for the last time ever, hundreds of Raptors fans gathered in the section behind the visitors’ bench and celebrated.

Much of the home crowd had already gone home, with many of the locals racing for the exits in the final minutes of the fourth quarter. Long after the sea of gold disappeared, the red shirts remained.

They held up signs, waved the Canadian flag, chanted and sung the national anthem. You could hear them all night – cheering after Raptors buckets or drowning out Warriors fans, who probably outnumbered them 20-to-1, during timeouts.

The team that many of them traveled across the continent to support is now one win away from its first NBA championship, and they’re not waiting to start the party.

On the court, however, Toronto’s players barely broke a smile as they put the finishing touches on a pivotal 105-92 road win to take a commanding 3-1 lead over Golden State in the NBA Finals.

There they were, one step closer to achieving their ultimate goal, but true to character, they refused to get ahead of themselves. There’s still work to be done.

“We were two games away, four games away, it doesn't matter until you get that fourth win,” said Kawhi Leonard, moments after another postseason masterpiece – 36 points, 12 rebounds and four steals in 41 minutes. “We just have to stay confident in ourselves, be patient, don't try to rush things, and see how it plays out.”

“We didn't do nothing yet,” Kyle Lowry reiterated. “We haven't done anything. We won three games. It's the first of four. We understand that. They're the defending champs, and they're not going to go out easy. They're going to come and fight and prepare to play the next game, and that's how we're preparing ourselves. We haven't done anything yet.”

It’s one of the biggest reasons why they find themselves in this position to begin with, on the cusp of making history.

Throughout this postseason run they’ve experienced low lows – dropping the opener to Orlando, getting blown out in Philadelphia, falling behind 0-2 to Milwaukee and missing an opportunity to steal Game 2 against Golden State. They’ve also had the highest of highs – Leonard’s buzzer-beating Game 7 winner against the 76ers, his dunk over Giannis Antetokounmpo in the series clincher over the Bucks, now a pair of wins in the Warriors’ building.

Every step of the way, they’ve navigated it with a level head. They haven’t let adversity break them or success blind them. They’ve remained focused on what’s in front of them and committed to the task at hand.

While Joel Embiid shared the gory details of his stomach virus, Leonard repeatedly declined to elaborate on the leg injury that’s hobbled him for most of the postseason. As Mike Budenholzer and the Bucks fretted over Drake’s sideline antics, the Raptors kept their heads down. When Draymond Green predicted the Warriors would come back to win the championship series in six games, Toronto simply proved him wrong. The Raptors have made headlines with their play, not their words. Theirs has been a quiet confidence.

With Klay Thompson back from the hamstring injury that kept him out of Wednesday’s contest, the Warriors got off to an early lead in Game 4. The first half was not pretty for either team – with both shooting under 16 per cent from three-point range – but the Raptors were thoroughly out-played in almost every other facet. They shot 34 per cent overall and were bested 29-18 on the boards. They should have considered themselves extremely fortunate to be within four points at the halftime break.

That’s when they beat Golden State at its own game. The Warriors might be the best third-quarter team ever, as we were reminded in Game 2 when they opened the second half on an NBA Finals-record 18-0 run. This time Toronto jumped on them.

First, Leonard hit a long three. Then he stole the ball, came down, and nailed an even longer three, all within the span of 20 seconds. He would go on to score 17 points in the frame. Meanwhile, the Raptors won the quarter 37-21.

“Kawhi Leonard came out and hit two big eff-you shots to start the half,” Fred VanVleet said. “There’s no defence for that. There are no schemes for that. That’s two big-boy shots that he came out of the half with, back-to-back threes. And that just kind of let you know how we were going to approach the third quarter and the rest of the half. It put us in good position.”

It was a dominant stand, particularly on defence. The Raptors held Golden State at or under 25 points in all four quarters. The Warriors failed to reach 100 points for the first time this postseason and only the fifth time at home all year – Toronto also held them under the century mark at Oracle in December.

All season long they built and experimented and picked their spots, hoping to peak at the right time. Without a defined identity heading into the playoffs, there was some question as to whether they’d be able to establish one on the fly. Those doubts have been put to rest.

Defence is this team’s calling card. When they’re locked in, as they were in the third quarter on Friday, they are special. As the stage has gotten bigger and the lights have gotten brighter, they’ve gradually gotten better.

The Warriors haven’t had Kevin Durant and while Steve Kerr sounded hopeful that he could return for Monday’s Game 5 in Toronto, that seems like a long shot given he hasn’t been able to get on the court and test out his injured calf in practice yet.

Before you even consider putting an asterisk next to what the Raptors have accomplished, consider the following. First, this Warriors team won a championship and had a record-breaking 73-win season without him. They still employ a superstar in Steph Curry, a couple all-stars in Thompson and Green, and another two former all-stars in DeMarcus Cousins and Andre Iguodala. They’re damn good.

Secondly, to make it this far – through an 82-game slog and a long, gruelling postseason – you have to be really good and at least a bit lucky. Golden State can attest to that as much or more than anybody.

These Warriors have won three titles in four years – they’re one of the NBA’s great dynasties. But would things have played out differently for them had Kyrie Irving and Kevin Love been healthy in the 2015 Finals, when they beat LeBron James and an underwhelming supporting cast of Cavaliers in six games? What if Leonard, then with the San Antonio Spurs, hadn’t landed on the foot of Zaza Pachulia in Game 1 of the 2017 West Finals? How about if Chris Paul was able to play in Games 6 or 7 with Houston up 3-2 on Golden State in last year’s Conference Finals?

On the other end of the spectrum, maybe they wouldn’t have coughed up their 3-1 lead to Cleveland in 2016 if Green didn’t get suspended. It’s all part of the journey.

Leonard has played most of these games on one leg. Lowry has been battling through a dislocated thumb that will likely require surgery after this is done. Pascal Siakam has been banged up, as has Danny Green. On Friday, VanVleet took an elbow to the face – he lost part of his front tooth and needed seven stitches to stop the bleeding under his right eye.

“He doesn’t look so good right now,” Marc Gasol said of VanVleet. “You probably won’t see him smile much the next couple days, but I don’t think anybody is going to smile yet. We’re all happy, but we’re not satisfied.”

The Warriors are still confident, and why not? Of the 244 teams that have trailed 3-1 in a best-of-seven series, only 11 (four per cent) have come back to win. Golden State has been on both sides of iconic collapses. They dug themselves out of a 3-1 hole to beat an Oklahoma Thunder team featuring Durant, Russell Westbrook and Ibaka in the 2016 West Finals before squandering their 3-1 lead to Cleveland in the Finals just a few weeks later. They know it can be done.

However, Toronto has shown no signs of letting up. Golden State’s dynasty could be coming to an end, but instead of trying to figure out what’s gone wrong in the Bay, give the Raptors the credit they deserve. The Warriors haven’t choked this away. They’re not some injury charity case we should all feel sorry for. The Raptors are here, one win away from dethroning the champs, because they’ve earned it.

They’re on a mission and they’re not going to stop until they’ve seen it through.​