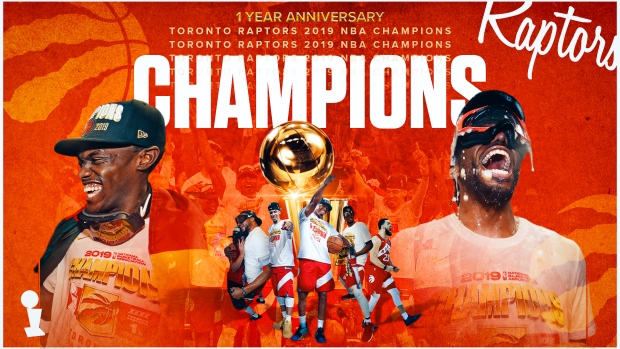 Those final few seconds of last June’s title-clinching Game 6 win in Oakland felt like an eternity. It was a fitting conclusion for a team, franchise and fan base that had already waited so long.

A nail-biting turnover, a scramble for the ball, multiple reviews, plenty of confusion, a few free throws. Then, finally, the buzzer sounded and the Toronto Raptors were NBA champions.

That moment, which inspired a nation and touched so many lives, happened one year ago this coming Saturday, but for some it still seems surreal.

“To be honest with you, it still hasn’t hit me that the championship is real,” said Raptors guard Norman Powell. “I think there have been times when you think about it and it’s like, it’s here, it’s real, it’s tangible, [like] when you have the trophy in your hands… But besides that, when those moments come where people [say], “Hey, what up, Champ?” I still find it a little weird. It’s like, man, I’m really a champion. That’s like a lifelong childhood dream and you accomplished it. So, it’s still weird, but it feels right.”

Listening to members of that 2018-19 club reflect back on the experience 12 months later, what stands out is how deeply personal it was for each of them.

To appreciate what made the night of June 13, 2019 so special for Powell you have to rewind a bit.

On May 25, just a few weeks earlier, the Raptors completed their unlikely series win over Milwaukee – rallying from an 0-2 hole to win a fourth straight game and advance to the Finals in front of their home crowd. Powell was also celebrating his 26th birthday.

Shortly after he and his teammates were presented with the Eastern Conference champion trophy – and showered in confetti – Powell made his way to the podium for his post-game press conference. He took a few questions from reporters and was about to head to the locker room, but there was one more from somebody in the back of the room. He recognized the voice.

“It was my mom,” Powell said. “I was just like, ‘I know that voice.’ I look and she’s standing by the curtain and she waved. It instantly brought a smile to my face.”

A photo was taken of them as they walked back from the pressroom together. He would later get it framed and give it to her as a gift.

“It just validated all the hard work and the sacrifices that I’ve put into this,” Powell said.

Family was also the driving force behind Pascal Siakam and Serge Ibaka.

Siakam often thinks about his late father before and after games, especially at important milestones in his career, and this was the biggest one he had reached.

“Like I always say, I’m doing it for him,” Siakam told TSN in a champagne-soaked locker room after the Game 6 win. “I wish he was here but I know he’s proud of me. I’m just happy that I’m able to keep his name and legacy alive.”

What, or who, does Ibaka remember thinking about when he finally became a champion? To answer the question, the 11-year veteran reached for a book that’s displayed in the living room of his downtown Toronto condo. On the cover there’s a picture of him with his 13-year-old daughter, Ranie, on stage during the trophy presentation. It’s titled “Champ dad & Champ babe.” She had made it for him.

The two big men have something else in common. They both thought about where they come from – Siakam from Cameroon and Ibaka from the Republic of Congo – and what this could mean for the continent of Africa.

“I’ll say this and I’ll keep saying it: To me, winning a championship was bigger than just me.”

Kawhi Leonard and Danny Green were already champions when they came to Toronto in the blockbuster trade from San Antonio the previous summer. They won rings together in 2014 but they wanted to prove they were more than just cogs in the Spurs machine.

“The biggest thing that I’ll always take away from it is I feel like me and Kawhi helped bring something special to the city,” Green told TSN over the phone last month. “A lot of times people don’t expect [players] to survive or do [well] outside of [Gregg Popovich’s] system. And this isn’t to take a jab at Pop or anything, but for us to succeed in another system, another organization, and bring a championship to the city, made it really special.”

When they won the title in San Antonio they were both young, complimentary pieces, playing in the shadow of future Hall of Famers, a legendary head coach and one of the league’s most accomplished franchises. With the Raptors, they were filling different roles at a different stage in their careers.

This time, Leonard wasn’t a rising star. He was an established superstar and the undisputed top dog on the court. Green wasn’t in his mid-20s anymore. He was 31 and one of the most experienced players on a team that needed his leadership and championship pedigree.

Green’s tenure was brief, like Leonard’s, but his lone season in Toronto will always stand alone in his mind.

“To do it in more than one city and with a younger group of guys [also made it special],” said the Lakers guard. “It was a different type of role – throughout the year kinda coaching guys, teaching them and [showing] them what it takes to win. In San Antonio we weren’t in that role, we were the guys learning from the older guys – Tim [Duncan], Tony [Parker], Manu [Ginobili], Pop. So, to actually have the roles reversed, having those young guys follow our lead and help them experience something special, that’s something that will stick with me forever.”

Fred VanVleet was finally able to breathe a sigh of relief once Game 6 was over. He played a crucial role in securing that last win – scoring 22 points and hitting five threes, including three in the fourth quarter. He was excellent in the series and even earned a vote for Finals MVP, but his postseason had been a roller coaster.

Mired in a bad and very public slump, the Raptors’ guard went from playoff goat to playoff hero in just a few weeks. That it coincided with the birth of his son, Fred Jr., made for a fun story, but it certainly didn’t help his sleep schedule. It did make the celebration that much sweeter, though.

“The journey of actually being in the playoffs was way more excruciating and intense than I thought it would be just because of how long it took to finish those series out,” VanVleet said. “I mean, two and half extra months of basketball, but the actual winning and celebrating and having the whole summer to enjoy it and kind of rest on what you’ve done, that was beyond anything I could have imagined.”

VanVleet says he never doubted himself, which isn’t hard to believe – he’s as confident as they come – but he did have a few moments of frustration. One of them came after playing just seven minutes in Game 4 of the second-round series against Philadelphia.

“I had a moment with myself in the hotel room just thinking and watching the game, trying to figure out how to be better,” he said. “That was a tough night for me, for sure, but I was able to talk to some of my coaches and they [kept] me on the right track and understanding that it’s a long, long run in the playoffs. I needed to stay emotionally ready for whenever my moment was to come. I think being able to bounce back out of that, it was a little added validation for me to play as well as I played after that.”

It’s hard to imagine that title-clinching win meaning more to anybody than it did to the guy who fuelled it – the Raptors’ longest-tenured player, Kyle Lowry.

Famously, Lowry scored 11 of his 26 points in succession to start Game 6. After going scoreless in the playoff opener against Orlando – and taking plenty of heat for it – it seemed fitting for him to cap off the championship run with one of his best performances ever.

Lowry is arguably the most important player in franchise history. In eight seasons with Toronto, the point guard has made six All-Star games and led the team to seven straight playoff appearances. He’s adapted to different roles in different systems next to different players. All the while, he’s remained their heart and soul.

Still, there are people that question whether he should be considered among the league’s most valuable players. They’ll resurrect the false narrative that he fades in the playoffs. They’ll say he doesn’t score enough or won’t take big shots. At this point, he’s heard it all.

Like VanVleet, Lowry had to be feeling some vindication when he held up that trophy.

“Nobody deserves it more than that guy, man,” VanVleet told TSN after the Game 6 win over Golden State. “People crap on him and talk bad about him more than any other player in this league that I’ve seen. Our own fans kill him, and he’s taken the brunt of a lot of slander over the years, but he takes it like a champ.”

The Raptors’ reign as defending champions has been extended due to the COVID-19 pandemic, which forced the NBA to suspend play in March. If everything goes according to plan, the season could resume next month, meaning the league would crown a new champion by mid-October.

Despite their continued success – they sit second in the East – there still aren’t many people outside of Toronto picking the Raptors to repeat, and there were far fewer right after Leonard and Green left in free agency last July. They’re not losing sleep over it, though.

While last year’s championship means different things to every player, the common denominator seems to be this idea of validation. They each proved something to somebody, or to themselves, that night in Oakland.

“To be simple and truthful, I don’t care what people think of the Raptors,” Siakam said. “I think for us it’s been a lot of years of caring about ‘Oh, love me too’, you know what I mean? I think that’s over, man. We are where we are. We are the champions, and if you don’t see it that’s your problem. For us, it’s about us. We’re not worried about what other people think. We’re worried about us. We’re worried about continuing to win games and chase championships. That’s the only thing we care about.”

“For the organization, I think it just shows that you can’t continue to count us out, and yet, they still do,” said Powell. “But we’re here and we have our piece and our mark on history at the championship level, and so you can’t take that away from us. We’re going to continue to put that pressure on you and show that we can win not just one, but multiple [titles].”