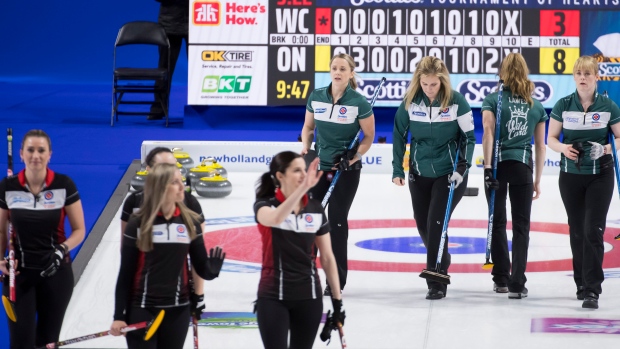 MOOSE JAW, Sask. — Jennifer Jones will have to wait for another chance to win a record seventh Canadian women's curling championship.

The decorated skip believes she has the team and the time to get that opportunity.

Jones and her Winnipeg wild-card team fell 8-3 to Ontario's Rachel Homan in Sunday's semifinal at the Scotties Tournament of Hearts.

Homan advanced to the evening final against Manitoba's Kerri Einarson for the title.

The winner will represent Canada at the world championship March 14-22 in Prince George, B.C.

Jones, 45, is tied with Colleen Jones for the most national women's championships won by a skip. She claimed the fifth of her six crowns five years ago in Moose Jaw, Sask.

Losing to Homan foiled her bid to win it again at Mosaic Place.

"You always think about it every time you step on the ice," Jones said. "Not even about winning a record seven, but winning and representing Canada.

"I would have loved to have had an opportunity to represent Canada in Prince George. It always is terrible to lose, but at least we gave ourselves a chance this year."

Jones and Officer had curled together since their junior days. Jocelyn Peterman replaced Officer.

Jones speaks of her team as a work in progress despite her experienced lineup.

"We worked on a lot of things. I feel they're all coming together," the skip said. "We're trending in the right direction which I love and having a ton of fun."

Trailing 5-1 after five ends Sunday, Jones tried setting up multi-point ends to get back in the game. Homan shut the door on her with defensive hits and Jones shook hands after nine.

"The disappointing part is we know we're better than that and we just let it get away too early," Lawes said. "We knew we had to keep it close with them, especially because we're such a great-hitting team.

"Obviously we come here and we want to win. We've built a lot over the last two seasons with this lineup. In the big picture, I'm really proud of where we're at. I know we have a lot left in the tank."

Homan's team boasted shooting accuracy percentage of 91 per cent compared to wild-card's 76 over the first five ends Sunday. Peterman struggled early at 68 per cent, which put pressure on Lawes to make runback doubles.

Jones was heavy on a draw in the second end to give up a steal of three. The skip was light on another draw to score two in the eighth and settled for one.

"It's hard to come off a loss," Jones said. "I get to go home to my kids and that's always great.

"I am not a super-competitive person _ people don't believe that _ except when it comes to curling.

"When we're on the ice, we want to win. It doesn't matter what we've won in the past. We're in the moment and we're just has hungry as we've ever been."

In her 15th career Tournament of Hearts, Jones was the wild-card team for the first time. The wild-card was introduced to the national men's and women's championship in 2018.

After losing to Einarson in the Manitoba women's final, Jones beat Tracy Fleury to gain entry into the main draw in Moose Jaw.