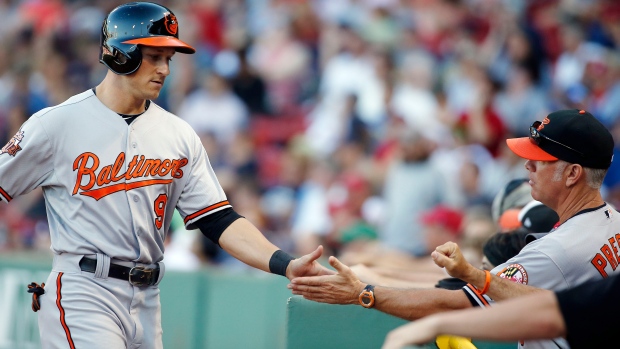 BOSTON - Buck Showalter's bullpen had been depleted and Baltimore's five-run lead had disappeared. Then, as they started their 30th inning in a 30-hour span, the AL East-leading Orioles pulled out another victory.

"That's the kind of game that the good teams win," Showalter said after the Orioles beat Boston 7-6 in 12 innings Sunday. "It's so easy to say, 'Boy, it wasn't meant to be today,' instead of making it happen."

A day after a day-night doubleheader that already taxed his pitching staff, Showalter watched his bullpen give up five runs in the seventh to force extra innings. In the 12th, David Lough hit a leadoff triple and scored on J.J. Hardy's single to give Baltimore its sixth win in seven games.

"A leadoff triple like that, especially in the 12th inning, it's good to see," said Brad Brach, who earned the victory with three innings of scoreless relief. "I was definitely relieved."

Brach (4-0) allowed one hit and one walk while striking out four, and Zach Britton got the last three outs for his 14th save. Showalter said first baseman Chris Davis, who has one pitching appearance in his career, was next if the Orioles hadn't scored in the top of the 12th.

"I have been out of it for like 2 1/2 hours," Orioles starter Kevin Gausman said. "Just walking around, chugging water, trying to get something going — anything I could do to get us to score some runs."

Edward Mujica (2-4) worked a scoreless 11th before Lough lined a triple to the centre field wall leading off the 12th. The next batter, Hardy, bounced one through the left side of the infield to give the Orioles the lead.

Hardy and Nelson Cruz each had three hits for Baltimore. Cruz had five hits Saturday in the second game of a day-night doubleheader and hit safely in seven straight at-bats before flying out in the fifth.

David Ortiz had four hits and Dustin Pedroia added three for Boston, which trailed 6-1 before scoring five runs in the seventh to tie it. Ortiz lined the ball to the left-field corner with one out in the 12th, but Lough threw him out trying to stretch it into a double.

"He was digging hard right out of the batter's box," Red Sox manager John Farrell said. "The ball caroms right back to Lough and he throws a strike to second base. I'm not going to fault him for an aggressive effort. He gave everything he had trying to stretch that base hit to a double."

The Red Sox have lost five of six and fallen a season-worst 10 games below .500. Boston centre fielder Jackie Bradley Jr. had two hits, threw out a runner at the plate and made a leaping catch to end the top of the ninth.

The Orioles scored in the fourth against Jake Peavy after Cruz led off with a double and scored when third baseman Xander Bogaerts fielded Delmon Young's grounder and threw it into the stands behind first base. Young made it 2-0 in the sixth when he was hit by a pitch to lead off the inning and eventually scored on Caleb Joseph's sacrifice fly.

Boston cut it to 2-1 in the bottom half on Ortiz's RBI single through the shifted infield. Baltimore scored four in the seventh on six singles and catcher David Ross' error on a play at the plate.

After Stephen Drew struck out to start the bottom half, Ross homered and then the next four batters singled to make it a 6-4 game. Pedroia struck out, then Brian Matusz was brought in to face Ortiz, who was 1 for 22 with 13 strikeouts in his career against the Orioles lefty.

Ortiz singled to make it 6-5, then Mike Napoli singled off Tommy Hunter to tie the game before Drew struck out to end the inning.

NOTES: Ortiz doubled in the fourth for his 1,708th hit in a Boston uniform. He passed Harry Hooper for seventh on the franchise list; Bobby Doerr is next with 2,042. Ortiz also had 393 hits with the Minnesota Twins. ... Bogaerts snapped an 0-for-27 slump with a third-inning single. ... Gausman was called up from Triple-A Norfolk to make the start. RHP Ramon Ramirez was designated for assignment to make room on the roster. ... Orioles RHP Bud Norris (groin) felt fine Sunday, a day after throwing a simulated game. Showalter said he's leaning toward starting Norris on Tuesday against Washington. ... Acknowledging Davis (.201) is "scuffling," Showalter gave him Sunday off. Showalter expects Davis to play Monday. ... Showalter brushed off Red Sox RHP John Lackey's comments Saturday after Cruz's five-hit game. Lackey said he had "nothing to say" about Cruz, apparently referring to his 50-game suspension a year ago for his role in the Biogenesis drug scandal. "We need to all make sure we check our own backyard before we start looking at somebody else's," Showalter said. ... Peavy has not won in 13 starts since April.