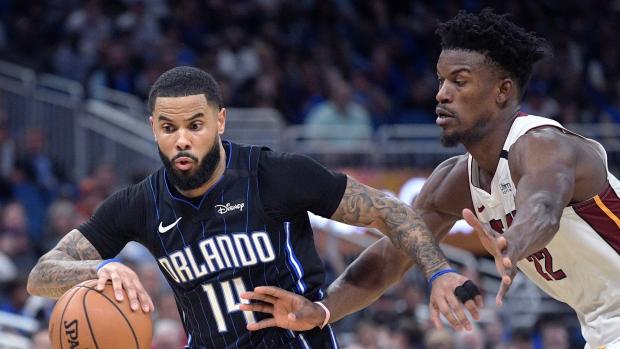 HOUSTON — James Harden had 44 points, 11 rebounds and 11 assists in the Houston Rockets’ 118-108 victory over the Philadelphia 76ers on Friday night.

On a “Flashback Friday” in which the Rockets wore retro ketchup-and-mustard uniforms from their back-to-back NBA title days in the mid-90s, Harden sported a white headband and cornrows.

Harden hit a deep step-back 3-pointer over Josh Richardson with 1:17 left in the game that put Houston up 10. On the next possession, he found Clint Capela with an alley-oop for a thunderous dunk.

Capela was a point shy of his career high in scoring with 30 points and 14 rebounds.

It was Davis' second straight 40-point game against the team he played seven seasons for after he was the top overall pick in 2012. He also had 13 rebounds for his 16th double-double of the season.

LeBron James had 17 points and 15 assists for the Lakers, who have won four straight after having a season-high, four-game losing streak.

Former Lakers Lonzo Ball and Brandon Ingram led New Orleans in their return to Staples Center. Ball scored a team-high 23 points and Ingram added 22 as the Pelicans had their four-game winning streak snapped.

Miami scored only six points in the fourth quarter, going 3 for 19 from the field. Jimmy Butler had 23 points and 10 rebounds for the Heat.

Aaron Gordon had 16 points and eight rebounds for the Magic, and Evan Fournier scored 15 points.

One day after holding the Toronto Raptors to 6-of-42 shooting from 3-point range in a victory in Miami, the Heat shot 7 for 37 from long range and 37.5% overall.

Marcus Smart started in place of the flu-ridden Kemba Walker and scored 15 points, adding nine assists and hitting a 3-pointer that gave Boston a four-point lead with 43 seconds left. Gordon Hayward scored 18 points, and Enes Kanter had 14 points and 11 rebounds.

Trae Young scored 28 points with 10 assists for the Hawks. They beat Orlando on Monday to snap a 10-game losing streak.

Jordan McRae scored a season-high 35 points, for Washington. Wizards guard Isaiah Thomas was ejected less than 1 1/2 minutes into the game for making contact with an official. Thomas was tied up along the sideline by Portland's Carmelo Anthony. As Thomas broke away from Anthony, he made contact with referee Marat Kogut, who stumbled into the crowd.

Booker scored at least 30 points for the fifth straight game, the longest streak of his career and tying a franchise high. Oubre shot 11 of 16 from the field, including 5 of 7 from 3-point range.