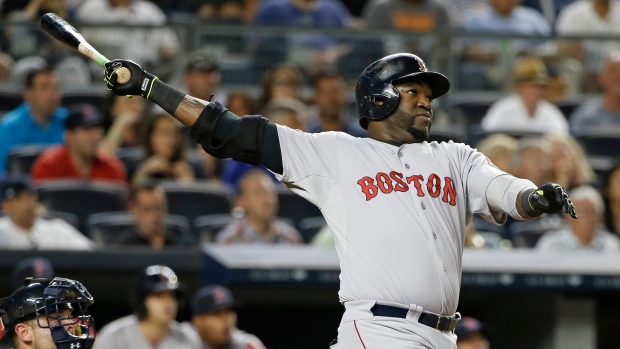 NEW YORK, N.Y. - Playing in prime time on national television against an AL East rival, the big names in the middle of Boston's lineup delivered.

"To get to where we want to be, those guys are going to have to drive the bus," winning pitcher John Lackey said. "You need the parts to do well, too, but they're kind of the engine that runs this thing."

Lackey (9-5) laboured through five innings before four Red Sox relievers pitched shutout ball the rest of the way. Held to two runs in the first two games of the series, Boston took two of three anyway to finish a 4-6 road trip and improve to 6-13 away from home this month.

"Anytime you win a series on the road, particularly against a team that's ahead of us, these are key," manager John Farrell said.

Mark Teixeira and Carlos Beltran (three hits) homered for the Yankees, who have dropped six of eight.

"You're behind in the count, you're walking people and giving them extra baserunners, it usually leads to damage," Yankees manager Joe Girardi said.

Koji Uehara worked a perfect ninth for his 18th save in 19 attempts.

After averaging 2 hours, 45 minutes in the first two meetings this weekend, the longtime rivals were back to their usual plodding ways in a game that took 3:38.

Pedroia made a diving play at second base to limit a Yankees rally, and centre fielder Jackie Bradley Jr. threw out Beltran at the plate to keep the score 8-5 in the sixth. It was Bradley's ninth assist of the season.

"Changed the momentum of the game," Farrell said.

Pedroia bounced a hit-and-run single through the right side in the third, and Ortiz was booed by the sellout crowd of 48,124 as he stepped to the plate. The slugger answered with a long drive well into the raised bleachers in right-centre to make it 4-0.

Ortiz tossed his bat aside and took his time on a wide trot around the bases, saluting his family in the stands as he approached third base.

Handed a comfortable cushion, Lackey grew frustrated and shook his head as Brett Gardner and Derek Jeter fouled off pitch after pitch in the third. They combined to see 21 pitches in consecutive at-bats, and Lackey screamed, cursed and gestured wildly when Jeter grounded an RBI single to right.

Perhaps worn down a bit, Lackey gave up solo homers to Teixeira and Beltran in the fourth, cutting it to 4-3.

Whitley and reliever Shawn Kelley threw 10 straight balls to begin the fifth, combining to walk the bases loaded with none out. Pedroia blooped a two-run single and later stayed in a rundown long enough for Daniel Nava to score from third.

"I'm most frustrated with the pitch to Ortiz, obviously, and the walk to Bradley that set up the fifth. That was unacceptable," Whitley said.

Ichiro Suzuki tripled to spark a two-run rally in the bottom half. He scored on Gardner's double.

Pedroia's sacrifice fly made it 8-5 in the sixth.

Mike Napoli doubled to start the second and scored on a single by slumping Stephen Drew, his second RBI in 57 at-bats this season.

Touted prospect Mookie Betts made his major league debut for Boston in right field. With his parents and fiancee in the stands, the 21-year-old Betts grounded into a double play his first time up but singled in the fourth for his first hit.

"It was great," Betts said, acknowledging he felt some jitters during his first at-bat. "I'm not one to put any extra pressure on myself."