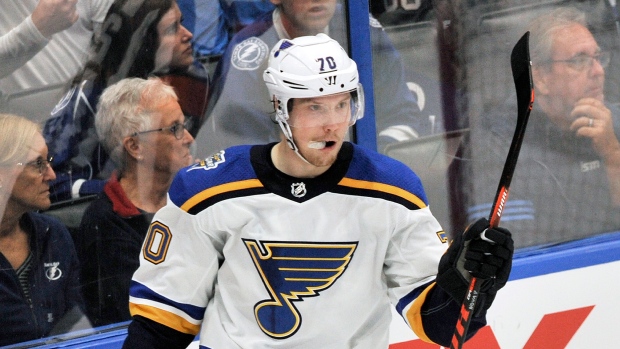 Oskar Sundqvist had two goals before leaving with an injury, and the Blues beat the Tampa Bay Lightning 4-3 on Wednesday night. The defending Stanley Cup champions were already playing without injured stars Vladimir Tarasenko and Alexander Steen.

"It goes back to, we're a team," St. Louis left wing Zach Sanford said. "Everyone on this team from top to bottom can step up and maybe take over a little more of a role or change their role a little bit to help the team be successful. We've been doing a good job with it."

Blues coach Craig Berube said Sundqvist, who left in the second period with a lower-body injury, will be evaluated Thursday.

Sanford and Brayden Schenn scored in the third and Jordan Binnington stopped 32 shots for the Blues. Ivan Barbashev had three assists after going six games without a point.

"I thought it was a good hockey game all around," Berube said. "Back and forth. Overall a pretty solid game."

“I thought it was two good teams going at it," Lightning coach Jon Cooper said. "In the end, if you really break it down, they got us on the special teams side of things. We both got power-play goals, but we gave up a shortie and eventually it ended up being the difference.”

The Lightning, who entered scoring on an NHL-best 41.2% per cent of their power plays at home, went 1 for 4. St. Louis scored on one of its two chances.

After Sanford scored the tiebreaker from the right circle at 8:21 of the third, Schenn made it 4-2 at 11:07 on the power play shortly after a 5-on-3 ended.

"We fought hard and we stepped up to the plate," Binnington said. "Got a couple big goals there and held the fort down."

Kucherov opened the scoring 3:53 into the second before Sundqvist scored a short-handed breakaway goal at 5:31 and then put the Blues up 2-1 3:09 later.

Sundqvist has five goals over his last five games.

Cirelli tied it 2-all with 8:21 left in the second when he dove into the crease to poke a loose puck into the net. He has five goals in the last six games.