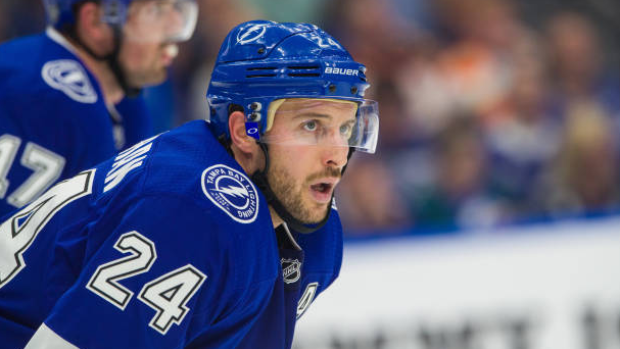 The Ottawa Senators acquired forward Ryan Callahan and a fifth-round pick in 2020 from the Tampa Bay Lightning on Tuesday for goaltender Mike Condon and a 2020 sixth-round pick.

Callahan, under contract through this season at a $5.8 million cap hit, announced earlier this off-season he will not play again after being diagnosed with a degenerative back disease. He will join Marian Gaborik and Clarke McArthur on long-term injured reserve with the Senators, raising their LTIR total to $15.3 million.

In a team release, Senators general manager Pierre Dorion said he believed moving Condon will help clear up the team's goaltending picture at both the NHL and AHL levels. Craig Anderson and Anders Nilsson are expected to share the Senators' net this season while Filip Gustavsson, Marcus Hogberg and Joey Daccord develop with the Belleville Senators.

"We believe we have the right mix of goaltenders both for the upcoming season and the future," Dorion said. "We are pleased with how our young goaltenders have been developing in Belleville, so this trade allows us to focus on continuing their growth at a proper pace while keeping two established goaltenders here in Ottawa. Our cap flexibility allowed us to proceed with this trade, which will also benefit us as we continue making adjustments to create a hardworking, exciting team."

Condon, 29, is also entering the final year of his contract and carries a $2.4 million cap hit this season. He appeared in just two games with the Senators last season, allowing eight goals on 40 shots. He allowed six goals on 23 shots in his lone AHL start. He took an extended leave of absence shortly after being waived by the Senators in October to work through lingering physical ailments.

The Lightning, who extended starting goaltender Andrei Vasilevskiy on Monday, signed Curtis McElhinney to a two-year contract on July 1 and also have Louis Domingue under contract for this season.

A veteran of 129 games with the Montreal Canadiens, Pittsburgh Penguins and Senators, Condon has a career 45-58-17 record with a .905 save percentage and a 2.80 GAA.

Callahan was drafted by the New York Rangers in the fourth round (127th overall) at the 2004 NHL Draft. He spent seven seasons with the Rangers before being traded to the Lightning (along with three picks) in exchange for Martin St. Louis and a second-round pick in March, 2014. He won a silver medal at the 2010 Vancouver Olympics with Team USA.