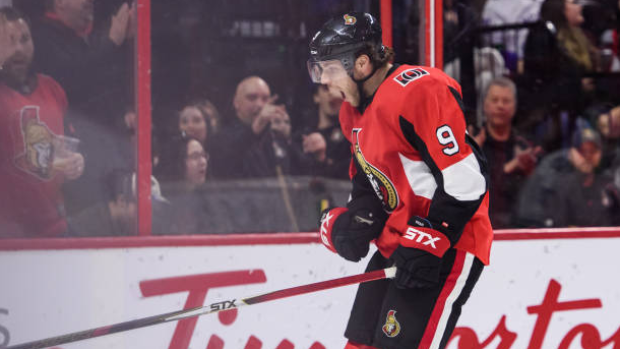 EDMONTON — Ottawa Senators forward Bobby Ryan was named the 2019-20 recipient of the Bill Masterton Memorial Trophy on Monday after publicly sharing his battle with alcohol issues.

The award is given out annually to the player who best exemplifies the qualities of perseverance, sportsmanship and dedication to ice hockey.

The 33-year-old Ryan entered the NHL/NHL Players' Assistance program on Nov. 20 to get help for alcohol addiction.

After going public with his story in an effort to help others with addiction issues, an emotional Ryan returned to the ice Feb. 25 against the Nashville Predators, then scored three times in a 5-2 win over the visiting Vancouver Canucks in his second game back two nights later.

Senators fans at Canadian Tire Centre were quick to cheer Ryan, giving him a standing ovation and chanting his name in his first home game in three months.

Lindblom was diagnosed in December with Ewing's sarcoma, a cancerous tumour that grows in the bones or in the tissue around bones. He originally had been ruled out of playing when the NHL season resumed following the COVID-19 pandemic that shut down major sports for months, but he made in appearance in the Stanley Cup playoffs, returning for Game 6 of the Eastern Conference semifinals against the Islanders Sept. 4.

Johns missed all of last season and the first 47 games of this one with painful headaches due to post-concussion syndrome. He scored four games into his return on Feb. 3 against the Rangers, with his parents in attendance at Madison Square Garden.

Ryan wished Lindblom and Johns good health and long careers in accepting the award, and called his battle "the hardest thing I've had to do in my life."

Ryan, who has played 833 career regular season games since being drafted No. 2 by the Anaheim Ducks in 2005, also thanked the Ottawa Senators for allowing him to leave the team to seek treatment, the NHLPA, and his family.

Ryan, from Cherry Hill, N.J., attempted to deal with the alcohol problem on his own before realizing he needed more help.

Ryan has 254 goals and 555 points in 13 NHL seasons split between Anaheim and Ottawa.

The Masterton award is voted upon by members of the Professional Hockey Writers Association and presented to the player who best exemplifies the qualities of perseverance, sportsmanship and dedication to hockey. It's name after a former Minnesota North Stars player who died on Jan. 15, 1968, as a result of an on-ice injury.