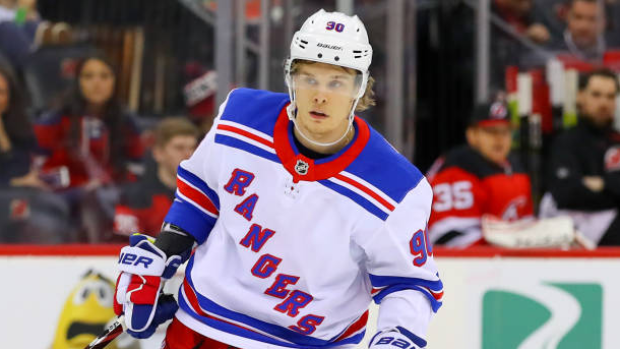 OTTAWA — The slogan for the Ottawa Senators' season is "The kids are alright."

However, it appears some of the kids aren't ready for the NHL just yet.

On Monday, the Senators announced the acquisition of forward Vladislav Namestnikov from the New York Rangers in exchange for defenceman Nick Ebert and Ottawa's fourth-round pick in the 2021 draft.

The Rangers will retain 18.75 per cent of Namestnikov's cap hit this season as part of the deal.

On Tuesday, Senators general manager Pierre Dorion said the trade had nothing to do with the team starting the season 0-2 or the fact Ottawa sent Drake Batherson and Filip Chlapik to its American Hockey League affiliate in Belleville, Ont., following a 4-1 loss to the Rangers.

"Our long-term vision is to make sure our younger players develop properly in Belleville and at the same time we want to make sure they don't lose the confidence," said Dorion. "We want to make sure when they're playing for the Ottawa Senators they can give us their best hockey possible and that not only helps this team, but it shows our fans we're doing it the right way."

Dorion balked when asked if the move was made out of necessity after realizing some of the team's younger prospects weren't ready for the NHL.

"This has always been part of our long-term vision," Dorion said. "If the kids weren't ready to play, we knew we would bring in reinforcements to make sure they can take the time to develop in Belleville."

Dorion feels more time in Belleville can only help some youngsters.

"We have so many good, young players in Belleville and it's not bad that they're growing together," he said. "At the same time we have some younger players in our lineup and if you look at how (Erik) Brannstrom has adjusted to the NHL, we're really happy with his progression so far, but not everyone is going to be ready at the same time and we have to make sure. I think we owe it to our fans that we can't put younger players here if they're not going to have success or they're going to lose their confidence."

The transition to New York didn't go as well as Namestnikov would have liked and, as such, the trade didn't come as a big surprise.

"It's a new, fresh start for me," said Namestnikov. "It's a young team here and lots of potential so I'm really excited."

Namestnikov was on the ice Tuesday for practice and playing on the left wing with Artem Anisimov and Connor Brown.

Namestnikov has played with Anisimov for Russia at the world championship and World Cup.

"It's a fast, fast team and I think I can bring that element as well," Namestnikov said. "I think I'm a reliable two-way forward that can skate and fit in with the young guys here."

Namestnikov also knows fellow Russian Senators Nikita Zaitsev and Vitaly Abramov, and played with Ottawa's Chris Tierney when both were with the Ontario Hockey League's London Knights. He also trains in the off-season with injured Senators defenceman Christian Wolanin.

Head coach D.J Smith saw Namestnikov play for London when he coached the OHL's Oshawa Generals. Smith feels his defensive side of the game has matured during his time in the NHL.

"He's a player that can play in all situations and he'll get that opportunity here and he's done it before," said Smith. "I think his game has really come around. He was an offensive player in junior when I watched him play and then he's really learned to play the defensive side of the game in the NHL. As you can see (from practice), he has some skill and some quickness and he'll make us a better team."

With the addition of Namestnikov, the Senators now have four of the 33 Russians playing in the league.

The Senators return to action Thursday against the visiting St. Louis Blues.