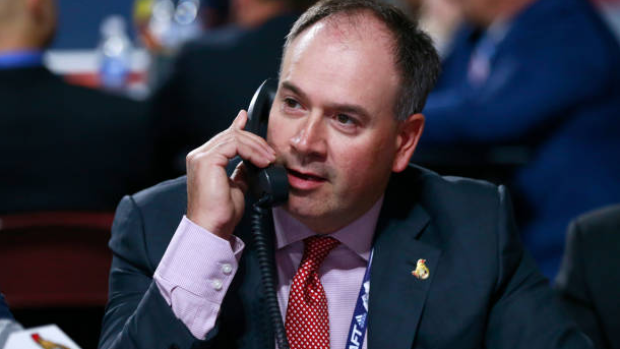 After a busy off-season filled with change, Ottawa Senators general manager Pierre Dorion says the time is now for the team to start performing after missing the playoffs in each of the past three seasons.

“As an organization we’re climbing the charts,” Dorion told Postmedia's Bruce Garrioch in an interview published Monday. “A lot of the hard work has been done. For us, now, it’s time perform. We’re at a place where everyone’s on the same page for our immediate success and our future success.

“What we’ve tried to do in this rebuild, we knew there’d be some tougher times, but at the same time we want to have a team, when they drop the puck on the first day of the year, that we know we’re going to be in the playoffs and we know can progress to win Cups. These things don’t get done overnight. It was always part of the plan, and how we structured the plan, with the way the game has evolved, that we continued this evolution.

The Senators finished with a 25-34-12 record last season, their first under head coach D.J. Smith. The team posted their highest points percentage in a season - .437 - since reaching the Eastern Conference Final in 2017.

Due to COVID-19 restrictions, the NHL appears likely to have an all-Canadian division this season, which owner Eugene Melnyk said last week would make the team's fight for a playoff spot more difficult.

“Even with the Canadian division, it’s not good for us this year, but you can take a look at some of the upsides,” Melnyk told Garrioch in an interview published on Sunday. “Our young guys will be playing against better players. Every one of those Canadian teams are tough teams and you’re not going to have an easy night.”

When it comes to the team's off-season moves, Dorion said Melnyk has been completely supportive of the team's changes

“Eugene has been nothing but 125 per cent supportive in everything we’ve tried to do,” Dorion said. “We worked together on the plan, we understood the timelines, we knew were going to add some veterans and we were going to have to make some tough decisions, but he’s been supportive. He’s our No. 1 fan as far as putting a team out there.”

While a firm date for the 2020-21 season has yet to be set, TSN Senior Hockey Reporter Frank Seravalli reported Friday that the NHL shared multiple draft schedules with the NHLPA on Thursday, including 56- and 52-game regular-season scenarios, which would begin sometime in mid-January.