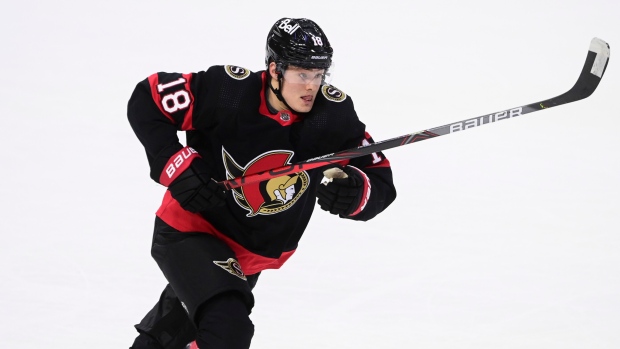 Ottawa Senators rookie forward Tim Stützle revealed Friday the injury that has sidelined him for the past two games was first sustained at the World Juniors earlier this month.

The 19-year-old was back on the ice Friday, skating in his usual spot on the team's second line, though his linemate Derek Stepan was absent on Friday.  Head coach DJ Smith said a decision on Stützle's status will be made Saturday, while Stepan and goaltender Matt Murray were given maintenance days Friday.

"It was really bad at the beginning but I think it’s getting better day by day," Stützle said Friday. “We will see what happens tomorrow and maybe good to go tomorrow.”

Stützle, “I felt good today and we will see what happens tomorrow.”
"It was an injury that happened at the World Jr’s” #sens

Selected third overall in the 2020 NHL Draft, Stützle has one goal through two games with the Senators this season. Smith has said the rookie is considered "day-to-day."

“It's just been something that's nagging," Smith said Wednesday. “And it really is minor but something that hampers him to not be able to go, to be a 100 per cent and with a player like that at his age, you know, we're not going to take that risk.”

Tim Stützle on the ice this morning. Seems to be checking his left hand after taking a shot. #sens pic.twitter.com/lALWVl2toC

The 19-year-old had five goals and 10 points in five games with Germany at the World Juniors prior to joining Ottawa's training camp.

The Senators will face the Winnipeg Jets for a third straight time on Saturday, hoping to get their first win of the set.