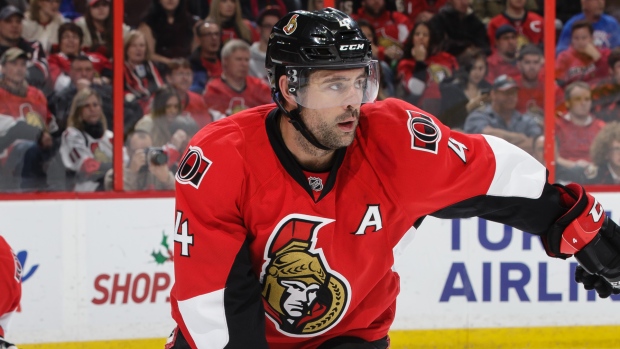 OTTAWA — Chris Phillips has several great memories from his 17-year career with the Ottawa Senators. He'll soon get to enjoy another special moment at Canadian Tire Centre.

His No. 4 will be raised to the arena rafters on Tuesday night before the Senators' home game against the Buffalo Sabres.

Viewers in the Senators region can watch the game LIVE on TSN5 at 6:30pm ET.

"This will encompass everything I was able to accomplish," said Phillips. "The big moments as a team, as an individual and now to be recognized brings it all together. It's like the final chapter."

Phillips, who spent his entire NHL career with the Senators, holds the franchise record with 1,179 games played. His 114 career playoff games ranks second in team history behind Daniel Alfredsson.

Selected first overall in the 1996 NHL Entry Draft, Phillips had 71 goals and 217 assists for 288 points over his career. An ailing back forced him into retirement in 2016.

A reliable stay-at-home defenceman, the Senators experimented with Phillips at forward for a time before he settled into his role on the blue line.

One of his bigger goals was a Game 6 overtime winner in the Eastern Conference final against New Jersey in 2003. The 2-1 victory forced a decisive seventh game in the series, which the Devils won 3-2.

Phillips, a 41-year-old Calgary native, said it was an emotional post-season.

"No doubt, it was a huge moment for me," said Phillips. "It was in those playoffs that (assistant coach) Roger (Neilson) was battling (cancer) and had given us a speech before Game 5. We wanted to win for him so bad and that win just meant we still had a chance."

"He always found a way to raise his game in the playoffs," said Bruins captain and former teammate Zdeno Chara. "I loved how his game went to the next level and he scored big goals like that or made a difference every shift. I just loved his smile after a game like that.

"We sat next to each other in the locker-room and after a good game we'd give each other a firm handshake and say, 'Good job.'"

Phillips was a rock during Ottawa's run to the Stanley Cup final in 2007, when the Senators lost to Anaheim in five games. He played 20 games in that post-season and led the Senators in ice time during the final.

In his rookie season, Phillips became fast friends with defenceman Wade Redden as the two had played on Canada's 1996 world junior team together. They quickly became inseparable and have enjoyed a strong friendship ever since.

"He's like a brother to me," Redden said from his home in Kelowna, B.C. "I would trust him with anything. We grew up together and learned a lot together both on and off the ice. I am so happy for him and he is so deserving of this honour."

Phillips' rugged style led to a number of back ailments late in his career. He was restricted to just 36 games in the 2014-15 season.

His last game, on Feb. 5, 2015, broke Alfredsson's franchise record for games played and would be the last time Phillips suited up for the Senators. He hoped to return after undergoing back surgery, but suffered a cracked vertebrae during his rehabilitation and missed the 2015-16 season.

Phillips, who won world junior gold in 1996 and '97, also represented Canada at the world hockey championship on three occasions, winning silver in 2005 and '09.

He was named an alternate captain for the Senators in October 2006 and kept the title for the rest of his career.

Frank Finnigan's No. 8 and Alfredsson's No. 11 are the only other numbers to be retired in franchise history.