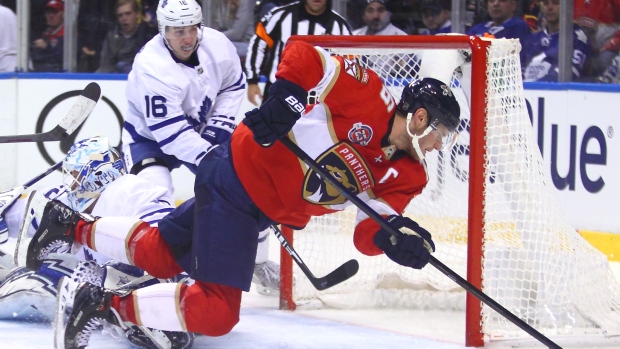 Two teams battling for third place in the Atlantic Division are set to meet Thursday when the Toronto Maple Leafs visit the Florida Panthers in Sunrise, Fla.

The Maple Leafs have 74 points with 18 games remaining in the regular season. Florida, in turn, has 72 points with 19 games left.

Catching the top two teams in the Atlantic Division -- the Boston Bruins and Tampa Bay Lightning -- feels like an impossibility, and the two Eastern Conference wild-card berths likely will be ticketed for teams from the Metropolitan Division.

In other words, it likely will be either the Leafs or Panthers in the playoffs - not both - and that adds significance to Thursday's game.

Viewers in the Leafs region can watch the game LIVE on TSN4 and TSN Direct at 6:30pm ET.

"The circumstances are obvious," Toronto captain John Tavares said. "Not much more needs to be said. It's a big game."

Florida, which rallied to a 2-1 victory over the Arizona Coyotes on Tuesday night, returns home after posting a 3-2-0 record on its recent road trip.

"It's good to feel confident for what will be our biggest game of the year so far," Panthers defenceman Aaron Ekblad said. "It's huge. We want to be all systems go."

Earlier this month, the Panthers rallied from a 3-1 deficit in the third period to frustrate the Maple Leafs once again. Hutchinson was also pulled in this game, after allowing three goals. Andersen allowed one goal in his brief relief effort.

Florida's Mike Hoffman has three goals and an assist in the two games against Toronto. Sergei Bobrovsky got the win in that second game, allowing the three goals.

As for the Panthers' stars, captain Aleksander Barkov has eight goals and 18 points in 24 games against Toronto.

Jonathan Huberdeau, who has 11 goals and 21 points in 26 career meetings with the Maple Leafs, has nine points in his past seven games overall.

Huberdeau leads the Panthers with 77 points, while Barkov is second with 62. Hoffman and Evgenii Dadonov are tied for the team lead with 25 goals each. Defenseman Keith Yandle, Florida's power-play quarterback, has five goals and 38 assists.

The team confirmed Muzzin's injury on Wednesday and announced that defenseman Calle Rosen was recalled from its AHL affiliate, the Toronto Marlies, to help fill the void.