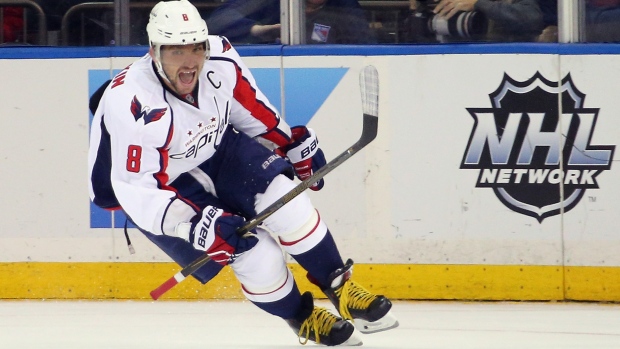 NEW YORK, N.Y. - While goal No. 500 is going to be special for Alexander Ovechkin whenever it comes, No. 499 was pretty amazing by itself.

The Russian superstar made a length of the ice rush and scored his second goal of the game at 1:25 of overtime and the Washington Capitals rallied to beat the New York Rangers 4-3 on Saturday.

"You don't see a highlight goal every game but it's moments like this that he shows up," said Capitals centre Nicklas Backstrom, who forced overtime by sliding the rebound of Justin Williams' shot under Henrik Lundqvist with 5.7 seconds left in regulation.

"They can't do anything about it. It's just amazing."

The sequence of plays leading up to the winner was thrilling.

Braden Holtby prevented the Rangers from winning just seconds before Ovechkin scored. The Washington goaltender stopped Rick Nash in close and then combined with defenceman Nate Schmidt to stop Derek Stepan on the rebound attempt.

Ovechkin, playing in his 800th game, got the puck, skated the length of the ice on the left side before cutting across the middle and beating Lundqvist to give Washington its 12th win in 14 games (12-1-1). Ovechkin will try to reach the 500-goal milestone on Sunday at home against Ottawa.

"That's a pretty big, long body. It was a spin-around chance. I threw my right pad and had nowhere else to put it but to Stepan. He made a nice move, but Schmitty stuck with the play and made a game saver. Those kind of plays, if you're a confident group, they happen."

Ovechkin got the loose puck next to his own goal, circled behind his net and then used his speed and great shot to end the game.

"I'm going to score one goal, sooner or later," Ovechkin said. "To be honest, I didn't think about it. I'll probably think about it tomorrow before the game. Right now, it's a huge comeback for us. When it happens, it happens."

Williams also scored for the Capitals.

Viktor Stalberg, Kevin Hayes and Oscar Lindberg scored for the Rangers, who were within seconds of beating the Western Conference leading Dallas Stars and the NHL-best Capitals in consecutive games.

"This was taking a step forward as a team," Rangers coach Alain Vigneault said. "We battled back from a two-goal deficit against one of the best defensive teams in the league, one of the goaltenders that had been hard on a lot of teams. We were real close to getting it done."

The Rangers nearly became the first team to beat the Capitals in regulation in a game in which Washington (now 22-0-1) held a lead after two periods.

Stalberg seemingly had the winner when he deflected Ryan McDonagh's shot past Holtby with 6:49 to play.

Washington coach Barry Trotz asked for a review of the goal because of a missed offside, but it stood until Backstrom got his 13th to tie the game.

Ovechkin and Williams scored to give the Capitals a 2-0 lead.

It didn't last though.

Lindberg cut the margin to 2-1 at 5:54 of the third with his 11th goal of the season and Hayes tied the game at 9:48 on a rebound of McDonagh's shot. It came 7 seconds after Hayes stepped out of the penalty box. McDonagh had a chance to ice the game for New York late in the third, but he missed an open net on an odd-man rush with Nash.

Ovechkin got a gift power-play goal late in the first period with the help of Rangers defenceman Dan Girardi.

With New York killing off a penalty, Girardi took a puck from Lundqvist circling the net and seemingly wanted to slide a soft pass to centre Dominic Moore. What he didn't see was Ovechkin well below the left circle with his stick down. His shot was in the open net a second later for his 23rd goal and 498th of his career.

Williams added a breakaway goal in the second period.

NOTES: Capitals F Marcus Johansson sat out the first game of a two-game suspension for a hit in a game against the Islanders earlier this week. ... Rangers F Chris Kreider missed his second straight game with a hand laceration. ... The Rangers face the Boston Bruins at home on Monday. ...Schmidt had two assists for Washington.