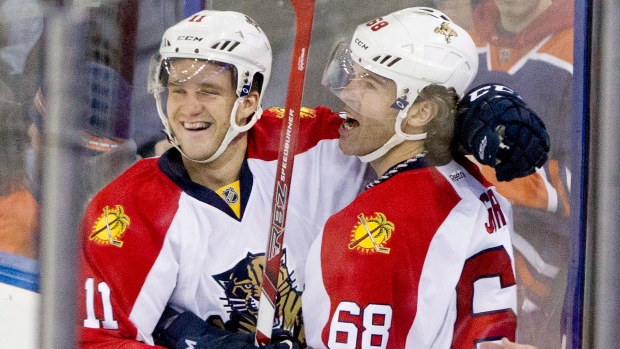 EDMONTON - When you've won a dozen straight games, not all of them will be pretty.

Jonathan Huberdeau's first-period goal stood up as the winner as the Florida Panthers extended their franchise-record win streak to 12 games with a 2-1 victory over the Edmonton Oilers on Sunday.

Jaromir Jagr also scored for the Panthers, who haven't lost since Dec. 12 — a 3-1 defeat against the Boston Bruins.

"It was a grinder-type game and we did what we had to do to win," said Panthers centre Nick Bjustad. "We didn't necessarily play well, but you're going to have those games where you don't feel the greatest but you have to sneak them out."

The Panthers (26-12-4) have become the first team in NHL history to win 12 games in a row after missing the playoffs the previous year.

Mark Letestu replied for the Oilers (17-23-3), who have dropped back-to-back outings.

Florida scored on its first shot of the game just over three minutes in when Oilers defenceman Darnell Nurse coughed up the puck, sending Jagr in on a breakaway. The 44-year-old lost the handle on the puck while attempting a deke, but it still managed to go through the legs of Edmonton goalie Cam Talbot for his 15th goal of the season.

The Oilers looked to have responded three minutes later when Taylor Hall picked the corner to beat Panthers starter Al Montoya, but a replay determined Edmonton was offside on the play and the goal was overturned.

Letestu said it was going to be hard enough to score on red-hot Florida, and it didn't help when a goal was taken away.

"We knew with this winning streak that they hadn't been giving up much and had been defending well and getting good goaltending," he said. "When you win 12 in a row, a lot of things are going well. To have one of our goals taken back, it was tough."

Shortly afterwards, Florida made it 2-0 as Huberdeau took a feed from behind the net and chipped it over Talbot's shoulder.

Edmonton got a goal back with 7:28 remaining in the first as some hard work by its third line paid off with a goal by Letestu.

The Oilers had the bulk of the chances for the scoreless second and third periods, but couldn't find the equalizer despite outshooting the Panthers 25-14 in the game.

"They're not pretty every single night," Montoya said. "You've got to find different ways to win. Tonight, we found another way to win."

The Panthers play the fourth of a six-game trip in Vancouver on Monday. The Oilers head on the road to face the Arizona Coyotes on Tuesday.

Notes: Florida's winning streak is the longest of any team in the NHL this season and longest since the Boston Bruins won 12 in a row from March 2 to 22, 2014… Out with injuries for the Oilers were Connor McDavid (collarbone), Nail Yakupov (ankle), Oscar Klefbom (finger) and Andrew Ference (undisclosed). Edmonton announced on Saturday that McDavid, the first-overall draft pick in 2015, will not return before the All-Star break… Missing from the Panthers lineup were Steven Kampfer (lower body) and David Bolland (lower body)… Edmonton was coming off a bizarre 3-2 loss to Tampa Bay on Friday that saw all three Lightning goals go in off of their own players… Oiler Ryan Nugent-Hopkins played his 300th career game.