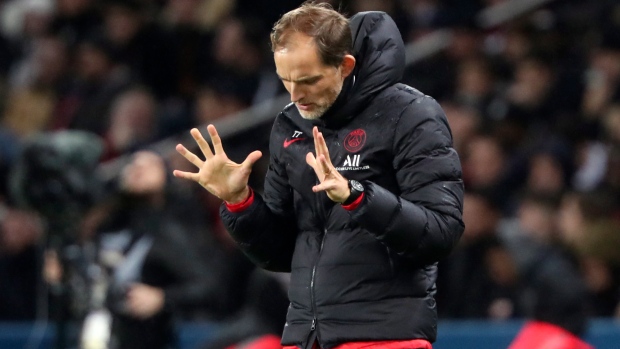 Error-strewn PSG trailed 3-0 and then recovered to lead 4-3 before conceding an injury-time equalizer to Serhou Guirassy in his second goal of the game.

It was the first time PSG conceded three goals in the first half of a league game since February 2012. PSG next faces Borussia Dortmund, which has netted 24 goals in the last six games, in the Champions League on Tuesday.

PSG had got away with making mistakes in its previous three games, but trailed 3-0 within 40 minutes against a side fighting relegation in 19th place.

"It’s obvious we can’t be happy conceding four goals. We weren’t concentrating at 100% in the first half,” PSG coach Thomas Tuchel said. "We didn’t start the game well enough. We didn’t show the right mentality for this game.”

PSG moved 13 points ahead of second-place Marseille, which will be without injured playmaker Dimitri Payet at fourth-place Lille on Sunday.

Amiens could have had more first-half goals, before Ander Herrera netted for PSG just before the break.

Guirassy opened the scoring after five minutes and combined brilliantly with Gaël Kakuta for Kakuta's stunning strike into the top corner in the 29th. PSG failed to stop forward Fousseni Diabaté running through from the halfway line and making it 3-0.

Herrera, signed as a defensive midfielder, played as a makeshift right back and was given a torrid time down his flank. But Herrera thumped home from Julian Draxler's corner to give PSG some hope at the break.

Thiago Silva, the long-serving PSG captain, was off the pace and taken off at halftime after regularly being turned and caught out of position.

Moments after Kakuta missed a chance to make it 4-1, 17-year-old midfielder Tanguy Kouassi twice rose superbly to head in two corners from Angel Di Maria for 3-3. Amiens could not cope and striker Mauro Icardi tapped home from left back Juan Bernat's cross to put PSG ahead in the 74th.

“Our reaction was very good,” Tuchel said. “We deserved to win the game.”

After Edinson Cavani missed a chance for a fifth PSG goal — and his 200th for the club — Amiens broke up field and Guirassy turned in a cross from the right.

PSG was without Neymar for a fourth straight game as he recovers from a rib injury, and Kylian Mbappé was rested.

Tuchel hopes to have both players available for the first leg of the last-16 game in Dortmund, but still sounded unsure about Neymar.

"I can’t say right now, we must wait until tomorrow’s training session,” Tuchel said. "We will decide tomorrow. ”

PSG has not reached the quarterfinals of the competition since 2016, when it was knocked out by Manchester City.

Nice moved up to eighth place after winning 2-0 at last-place Toulouse, with goals from attacking midfielder Pierre Lees-Melou and defender Christophe Hérelle.

Toulouse, which is 14 points from safety, had a player sent off in each half.

Nimes continued its revival by beating Angers 1-0 and moving out of the relegation zone into 17th.

Third-place Rennes, which is one point ahead of Lille, travels to play Reims.