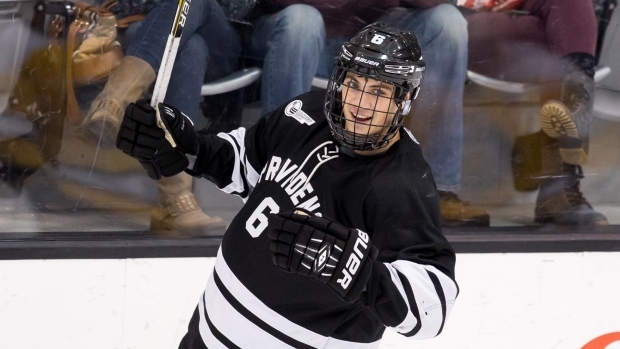 PROVIDENCE, R.I. - Tom Parisi broke a tie on a power play with 5:01 left and Providence beat Denver 4-1 on Sunday night in the NCAA East Regional final to advance to the Frozen Four.

Providence (23-13-3) will face Nebraska-Omaha on April 9 in Boston. Nebraska-Omaha beat Rochester Institute of Technology 4-0 on Sunday night in the NCAA Midwest Regional final. Boston University will play North Dakota in the other semifinal.

The game turned late in the third period after Denver's Joey LaLeggia was handed a 5-minute major and a game misconduct for contact to the head.

"Our power play struggled at times this year and our power-play won us a game tonight," Providence coach Nate Leaman said after guiding the Friars to their first Frozen Four appearance since 1985.

Denver coach Jim Montgomery expressed his displeasure over the penalty on LaLeggia.

"I don't how to coach any differently than our players always attacking," Montgomery said. "It cost us a 5-minute major but I don't know. I guess you're supposed to back off and let a guy attack you instead of angling the puck like I've taught them.

"Joey LaLeggia did everything I asked of him on that play but unfortunately it was head-hunting. By the rule if the contact is to the head, that's the rule."

"He got us through those tough times."

Providence's Noel Acciari opened the scoring on a power play with 5:38 left in the second period, stuffing a backhander past Jaillet off a pass from Shane Luke.

Denver (24-14-2) tied it at 7:52 of the third on LaLeggia's power-play goal. LaLeggia's shot hit the glass and the puck ricocheted in off Gillies' back.

Denver made a bid for a short-handed goal only to have Evan Janssen hit the left post.

Leaman then called a timeout, shortly before Parisi scored his winner.

"I thought we had to relax," Leaman said. "We were pressing a little. You have to remember to relax and execute."

Brandon Tanev and Kevin Rooney added empty-net goals for the Friars in the last 1:32.

The victory erased a painful memory the Friars experienced when they were defeated by Union in the 2013 quarterfinals.

"We remembered the feeling we had that year against Union," Gillies said. "We didn't want to experience that again."