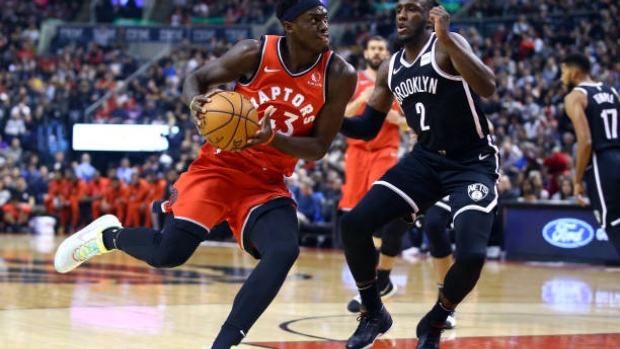 TORONTO — Kyle Lowry looked puzzled when asked in the post-game locker-room how it felt to see seven consecutive three-pointers go in to start the game.

"Who did that?" the Raptors point guard asked.

"You guys," someone answered.

"Oh, I didn't know," Lowry shrugged. "No matter, we just have to keep shooting, keep getting shots up and playing aggressive."

Toronto knocked down nine three-pointers in a sizzling first quarter Saturday en route to a 110-102 victory over the Brooklyn Nets. But the Raptors said it wasn't so much their shooting as their hustle and flow that earned them just their second win in six games.

"It gave us some good energy to start, to shoot the ball so well," coach Nick Nurse said on the victory, which ended Toronto's three-game home losing streak.

Norman Powell added 25 points for the Raptors (17-8), who were missing Fred VanVleet (knee contusion) for the third consecutive game. Marc Gasol had 17 points and 15 rebounds, both season highs. Lowry added 17 points, while Serge Ibaka had 12 points and 12 boards.

"They were nine of 10 in the first quarter? I knew it was going to be tough for us to win," said Nets guard Garrett Temple.

Three-point shooting, normally one of the Raptors' strengths, had become a sore spot during the team's recent slump. Second in the league through the first 19 games, Toronto's three-point percentage had plummeted from 40 per cent down to 27 per cent during the previous five games.

The Raptors appeared to end their shooting woes in emphatic fashion, hitting their first seven shots from distance and going 9-for-12 in the first quarter, one shy of their franchise record for threes in a quarter. But their troubles returned — they shot just 5-for-28 from three over the final three quarters.

"We shot it really good at the start, got back to ourselves ... I'm just kidding," Nurse said. "We had a really, really good offensive flow, I thought, until the fourth. I thought for a long stretch of the season, I wouldn't say our offence was beautiful or anything but it looked organized, and it looked like we were going to the right guys at the right time."

The Raptors led by as many as 16 points in the first half, but a sloppy stretch spanning the second and third quarters allowed the Nets to climb back to within two points and Toronto led 90-83 with one quarter left.

Five straight points from Powell had the Raptors up by 14 with 8:32 to play. The Nets pulled back to within eight, but when Powell scored on a fastbreak windmill dunk with 2:31 to go, the highlight-reel play had Toronto back up by 15 and it was game over.

Siakam had been vocal over the previous few games about the need to be more aggressive, and he definitely delivered Saturday. On one forceful play late in the third quarter, Siakam chased down Rodions Kurucs then grabbed the rebound off his own block, drawing delighted cheers from the Scotiabank Arena crowd.

"He looked super energetic in pace right from the start. Boom, he's getting the ball off the rebound and really up the floor quickly and into the paint," Nurse said. "He just decided to be a little bit more assertive. He didn't hesitate, when he decided to go to the rim, he went, right?"

The game was also a positive step for Lowry and Ibaka, who have struggled to get back in a groove since returning from long injury layoffs. In Toronto's 112-92 loss to the L.A. Clippers two nights earlier, Lowry missed all seven of his three-point attempts, and Lowry and Ibaka combined to shoot 1-for-15 from the field.

The Raptors have won an NBA-record 34 consecutive home games against Atlantic Division rivals, a win streak that stretches back to Nov. 10 of 2015. They've beaten the Nets in 16 of the last 17 meetings.

The Raptors spotted the Nets a 12-2 lead in the first 90 seconds Saturday, but rallied with a 15-4 run to take their first lead of the game midway through the first quarter. A three by Siakam would give Toronto a nine-point lead. The Raptors took a 38-31 advantage into the second.

Lowry's three-pointer early in the second capped a 9-0 lead to put Toronto up by 16. But the Raptors then went cold. They made just two of their long-range shots in the frame, and allowed the Nets to creep back within four points. Toronto took a 65-60 lead into the halftime break.

The Raptors host the Cleveland Cavaliers on Monday, then visit Detroit to face former coach Dwane Casey and the Pistons on Wednesday.