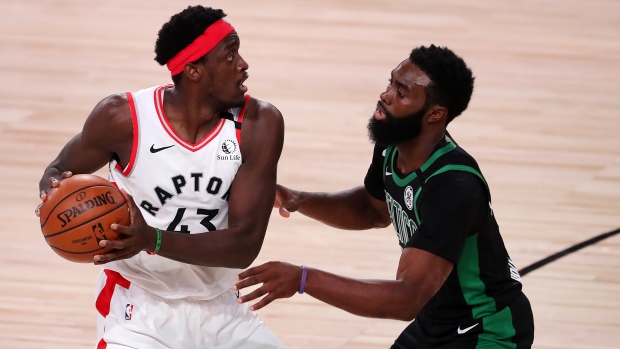 TORONTO – If you watched the Raptors at all in the NBA bubble, particularly during their post-season run, you know that Pascal Siakam didn’t look much like Pascal Siakam.

Toronto’s talented young forward was having a memorable, life-altering year – highlighted by an NBA championship, a max salary contract extension, and his first career All-Star selection – before the pandemic hit and forced the league into a lengthy hiatus.

When the season resumed more than four months later on the Walt Disney World campus in Orlando, Siakam struggled to find his game, and with it, his confidence. There were moments in the team’s second-round series with Boston – which came to a disappointing end in that Game 7 loss – where he didn’t even seem comfortable with the ball in his hands.

Looking back on it now, after all this time, it’s still difficult to fully grasp. From a basketball standpoint, this was Siakam’s first post-season in his new role as the focal point of the Raptors’ offence. We knew there would be a learning curve and likely some growing pains. He knew it too. But how could one of the game’s rising stars – a guy that blossomed in the playoffs, en route to the title, a year earlier – have faded and fallen so drastically?

In this case, the simplest explanation may also be the best way to understand what happened. If Siakam didn’t look like himself, it’s probably because he didn’t feel like himself.

“It was weird watching myself [back],” said the 26-year-old forward, speaking to the media via videoconference on Thursday, as his team gets set to open training camp in Tampa. “When I watched the games one of the things that I really pointed out was that I didn't recognize myself, just in terms of having fun.

He’s an elite professional athlete, who gets paid well – his extension, worth nearly $137 million over the next four years, kicks in this season. As such, it’s fair to critique his game if and when he doesn’t deliver. But sometimes, and for some people, it’s too easy to forget that in spite of the job, the profile, the lifestyle and the money, NBA players are human, first and foremost. There’s more to sports, and to life, than meets the eye.

There’s no blueprint for what Siakam and the rest of the league’s players were faced with – having to put their training and careers on hold for months, leaving family and friends behind in the middle of the global pandemic, and during a time of social and racial unrest, to isolate from their communities and try to focus on basketball.

Just because he wasn’t the only person that had to deal with it doesn’t mean that everybody dealt with it – or deals with anything – the same way. It takes some self-awareness and a lot of courage to be able to admit that, to be vulnerable, and to open up in the way Siakam did on Thursday.

“The world is crazy right now,” he said. “There's so many different things that we all have to deal with as individuals, and I think it was no different for me. Just dealing with different things – from the virus, to just all the things that are going on the world, family problems, it was just a lot of things. I didn't feel like I was where I wanted to be physically and mentally.

“For me, my off-season is always focused on working on things and making sure that I come back a better player. And it was no different [this off-season], but obviously with a little edge, knowing that we didn't get where we wanted as a team and I didn't play the way that I wanted to.”

Siakam has become known for his extensive off-season workout program – Rico Hines’ famed and star-studded runs at UCLA, the mix tapes showing off the additions and refinements that he’s made to his game. He’s taken substantial leaps in each of his four NBA seasons, and has always credited much of that improvement to his summer training.

Despite the unusual nature of this off-season – not knowing for sure when next season would start until last month – he’s confident that he had enough time in the gym. Could he have used more? Sure.

“But that’s 2020,” he joked. “You don’t know what is going to happen. You have to expect anything and you got to just be ready.”

For Siakam, looking back at his experience in the bubble – and trying to learn from it – was about more than just watching film and breaking down his game, although he did that as well. In addition to his work on the court, Siakam focused on the mental side of the job – understanding the importance of taking care of his body and his mind.

Siakam has always had a small inner circle – mostly family and his agent – but he recently expanded it to include a personal trainer, a strength and conditioning coach, a nutritionist, and a chef. If he’s going to take that next big step towards superstardom, he knows he has to be better prepared, mentally and physically. Most importantly, he also had to rediscover his joy for the game.

“Obviously I looked at the games and things I could have done better, but I think overall it's just [about] getting right,” he said. “There’s a lot of things going on in the world and I think we’ve all got to, kind of, you know, make sure that we get right. And for me, that was the main focus, just getting right. I'm in a good place right now. I feel happy, excited about the future, and I just feel like I have that joy again.”

The Raptors have a lot riding on Siakam, this season and beyond. But they – like almost everybody else who has followed his unlikely ascension from Cameroon to the pros – are confident that he’ll bounce back in 2020-21. Given his drive, work ethic and track record for overcoming obstacles at every step of his journey, he’s earned the benefit of the doubt.

“Obviously I was disappointed,” Siakam said. “The fact that we didn’t win, obviously, and then also the fact that I didn’t play the way I wanted to – I don’t think anybody could be more disappointed than I was.