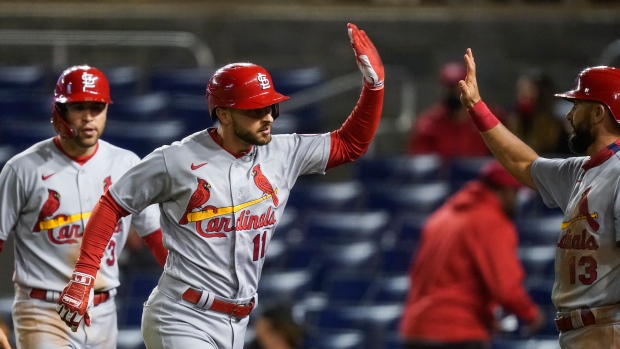 WASHINGTON — Here's how Paul DeJong explained the game plan the St. Louis Cardinals devised to face Washington's Joe Ross for the second time in less than a week: "We just wanted, as a group, to stay on the fastball."

No matter how you characterize it, sure did work well.

“There’s a lot of ways you can score,” Shildt said. “The homer happened tonight.”

Five days after Ross befuddled the Cardinals with a steady set of sinkers and sliders in Washington's 6-0 win, St. Louis figured it needed to try something different.

The message — in the pregame meeting, during conversations around the batting cage and in dugout chatter — essentially boiled down to: Don't worry so much about the darting sliders and just focus on the fastballs.

“We were just really disciplined today as a group ... not missing the ones we needed to hit,” DeJong said, calling the performance “a validation of what we do.”

He got the offence going by clanging a solo shot off the left-field foul pole in the second inning on a 95 mph sinker for the first run allowed by Ross (1-1) in three games this season after he sat out 2020 because of COVID-19 concerns.

DeJong ended Ross' evening with another drive to left, this one off a high fastball after Dylan Carlson was walked intentionally to load the bases, making it 10-2 in the fifth.

Edman, who hit a 3-0 pitch, and Goldschmidt homered in the third off Ross, whose season ERA went from 0.00 to 5.87 after he gave up 10 runs in 4 1/3 innings. Justin Williams added a shot off Ross' replacement, Kyle Finnegan.

When Shildt was asked before Monday’s game about facing Ross again so soon, he replied: “I feel good about our plan.”

Guess he was right.

Matt Carpenter, who came in batting .069 and was dropped to seventh in the order, provided an RBI single in the fourth as the Cardinals built a 6-0 lead with the help of Flaherty's sacrifice bunt.

Flaherty (3-0) is used to that sort of cushion. The Cardinals are averaging 11 runs in his four starts this season — and 3.25 runs in the 12 games started by other pitchers.

He is now 14-0 when St. Louis scores at least five runs in one of his starts.

“Still got to treat it like it’s a one-run, two run-game,” Flaherty said. “Things don’t really change. It just becomes a mental game for you.”

Washington dropped to 5-9 and here is a sign of where things stand for manager Dave Martinez at the moment: He turned to infielder Hernán Pérez to pitch the ninth, his second appearance in a blowout loss against St. Louis in less than a week.

“We haven’t had starters go deep,” Martinez said, then turned his attention to his group of relievers: “They're getting taxed. They're pitching way, way too much. We definitely got to keep an eye on these guys or we won’t have a bullpen.”

Cardinals: OF Tyler O’Neill (right groin) is expected to come off the 10-day injured list for Friday's start of a seven-game homestand. ... OF Harrison Bader (right forearm) planned to take batting practice on the field Monday and has been throwing from 120 feet for several days.

Nationals: LHP Luis Avilán, 31, decided to have Tommy John surgery after tearing his UCL, Martinez said. Avilán went on the IL on Friday.