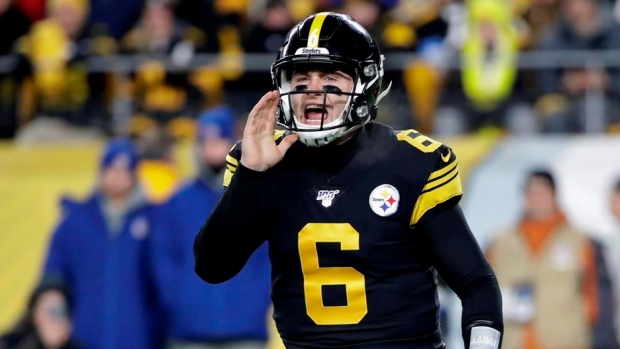 The 25-year-old former NFL quarterback signed a three-year contract with the Redblacks last week and is in the middle of his seven-day quarantine before joining the team.

LaPolice wants to make it clear he’s not going to jump into the lineup right away. He spoke to TSN Radio 1200 Ottawa on Monday to discuss his expectations for Hodges and the challenges he will face moving to the CFL.

“I get he played in the NFL and had some opportunities, but we have to make sure we lower our expectations,” the 51-year-old head coach told TSN Radio 1200 Ottawa. “He’s not going to start on his first day, but he’s a good young player who our personnel department has had an eye on for a long time.”

Hodges played eight games in the NFL for the Pittsburgh Steelers in 2019, including six as a starter. He threw for 1063 yards with five touchdowns and eight interceptions during his time in Pittsburgh.

The Alabama native had a strong college career with Samford University where he was named the Southern College Conference Player of the Year three times. He also earned the Walter Payton Award in 2018 and set a NCAA FCS record with 14,584 career passing yards.

After Hodges is done his quarantine, he will have to adjust to the CFL game, which LaPolice says is not for everyone.

The other aspect that excites LaPolice is the fact that Hodges is battle tested.

“One thing I always like when I’m evaluating quarterbacks is seeing guys who have played a lot of games,” said LaPolice. “Sometimes we get a guy who only started nine games in his senior year, and they just haven’t been through enough games.”

The Redblacks also recently signed wide receivers Kenny Stafford and Terrance Williams. While Stafford has some CFL experience over six seasons, Williams is getting his first taste of three-down football.

“[Some of the challenges could be] understanding CFL concepts and the motion and movement up here,” LaPolice said. “It’s a little different in how you use the waggle and attack the line of scrimmage. It will be something he has to start getting used to.”

Williams played six seasons with the Cowboys from 2013 to 2018 where he had 232 receptions with 20 touchdowns over 83 games.