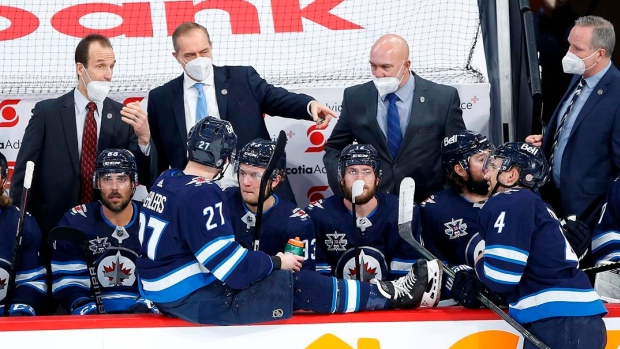 Despite the Winnipeg Jets being swept in the second round of the playoffs by the Montreal Canadiens, a series where many of Winnipeg’s top players struggled offensively, head coach Paul Maurice maintains he believes in the team’s core going forward.

“I think the core is very close to being right,” Maurice said in his end of season media press conference. “And some of that is just continuing to develop that core. The pieces around the core are probably the most work we’ll do around it.

“It’s hard to find a core that you like.”

After sweeping Connor McDavid and the Edmonton Oilers in the first round, the Jets had a nine-day layoff between rounds after the Canadiens went seven games against the Toronto Maple Leafs.

The Jets were without the services of Mark Scheifele for most of the Montreal series, after he was handed down a four-game suspension from the NHL’s Department of Player Safety for charging Canadiens forward Jake Evans in Game 1.

Against Montreal, Kyle Connor had one goal and two assists, Josh Morrissey, Nikolaj Ehlers and Pierre-Luc Dubois all recorded just one assist while captain Blake Wheeler had zero points.

Connor Hellebuyck finished the playoffs with a .931 save percentage and 2.23 goals-against average.

After finishing third in the North Division this season, the Jets will return to the Central Division next year.

"Our room right now, the culture in our room is as good as it's been since I got here and I think that is priority No. 1 for your job as a coach," said Maurice. "I think we have more players invested in Winnipeg now than we ever have."